In the beginning there was nothing. Scientists, philosophers, scholars, and clergy studied everything. They looked high and low. They looked near and far. The analyzed, prayed, discussed, and wrote reports. They all came to the same conclusion. There was nothing. Most importantly, they all agreed that they didn’t exist either.

From the nothingness formed a cloud. And after the beginning there was nothing except for the cloud. The cloud began to cry. There are some sad things known to man, but ain’t too much sadder than the tears of a cloud. Sadness grew from the dark puddle. The sadness turned to rocks, which formed the mighty land mass Earth. From the land mass grew trees. The cloud had something to rain upon. The cloud grew happy, but continued to cry. These tears of joy formed a puddle of delight that spread across the Earth. These were the seas.

The trees began to suffocate and run in circles. The cloud saw that its friends, the trees, were dying. It let out a gasp of horror. This gasp became the wind, and it covered the Earth. The trees breathed the wind deep into their lungs. They lived. They were so happy to live that they planted their roots deep into the ground, never to walk again.

A single bird landed in a tree. Neither the clouds, the Earth, the darkness, the wolverines, nor the trees knew where the bird came from, as there had been nothing before them. But the bird built a nest. Soon it laid eggs, and four of the five eggs hatched. These birds were named North, South, East, and Down. They flew to the four corners of the round Earth, and the directions were named after them.

Down was attacked by one of the ice dwarfs. The fifth bird, West, finally hatched and killed the ice dwarf. West noticed that Down hadn’t actually been killed by the ice dwarf. He had simply flown straight into the ground, as this was his name. He was also not smart. The ice dwarf had been trying to revive Down. The ice dwarf, whose name was Rudolfo, had a giant father. This giant ice dwarf vowed revenge upon the birds, and clapped his hands three times. And this created the heavens. Rudolfo, who had previously been dead, asked his father not to take revenge on the birds. And this created a system of bartering.

Time passed, and the bird moved to another tree and built another nest. This time, he decided that he was lonely and wanted a wife so he could start a family. They began to pray, but soon noticed that there were no gods in the heavens. They took apart their nest and moved to the ground. The bird’s wife died of sadness. The cloud rained sadness once again, and the Earth was flooded. The bird flew again to the tops of the trees, but they were soon not high enough. The rocks began to stand upon each other and formed mountains. The bird flew to the top of these mountains to wait for the flood to end.

Soon the waters descended. The ice dwarfs returned to their homes and the bird to its. But as the bird slept, it was attacked by the ice dwarf Rudolfo, whose father had been killed by the bird. Rudolfo plucked out all of feathers of the bird and planted them in the sky. The feathers began to melt. The feather vapors made their way to the heavens and began to form the gods. The ice dwarf plucked the eyes from the bird and cast them into the sky. One became the sun. The other the moon. The bird pleaded for mercy, and it was granted by Rudolfo’s father, who had previously been dead. This is why ice dwarfs and birds of all kinds live in harmony today.

The gods were three brothers, Mitch, Ruben, and Clancy. They looked down upon the Earth and noticed that it was bare. They plucked hairs from their heads and planted them in the ground, and these became the trees. They melted the ice dwarfs and cast them across the Earth and these became the seas. But they knew that the Earth needed more. It needed life. They asked the scholars, scientists, philosophers, and clergy what to do. They agreed that the gods should create man.

The gods went to the bird and plucked a single feather and planted it in the ground. This became man, who they named Adam. The man went to the bird and plucked another feather. Adam planted it in the ground as he had been shown by the gods. This feather became man, who they named Steve. The bird then flew away, and they could get no more feathers. This is why birds and man of all kinds hate each other today. This is why they named their land Maize.

Adam and Steve lived in happiness for many years. They both had a joy in their hearts. But even though they were so gay, as hard as they tried, they could not produce another man. The gods took pity. They trimmed their toenails and planted them in one pile in the ground. This became woman, who they named Mildred. All three, Mildred, Adam, and Steve followed the directions of the gods, and soon Mildred was with child. The gods looked down and noticed that it was good. This is why parents today come in threes.

I don't know why, but this is the funniest damn thing ever. EVER! 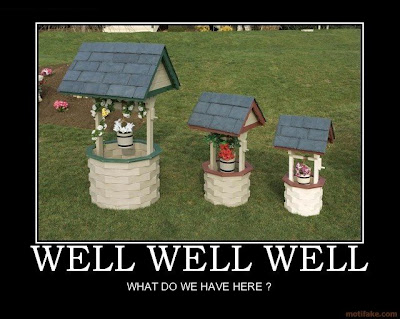 Created by His Excellency Kaboom32 at 8:42 AM No comments: