This is a follow up to my previous Summer 2011 post to report on what I actually accomplished. If you're really going to read this, you might want to check that out first.

First, I did get quite a bit of work done on my house, though I'm not quite finished with all I wanted to. I put in a new floor in the sun room, and it looks pretty darn good. I decided that I don't like the baseboards, though I didn't decide that until they were in. So I'm going to replace those over the next week. I also removed the wallpaper and gave the room a bit of color. 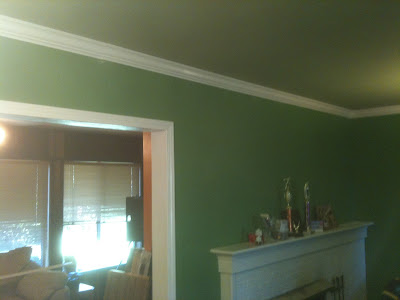 I got my threshold finished, and it also looks pretty darn good. That ended up being the most difficult part for sure. I put baseboards in most of the house. Then over the past couple days I have put in the crown molding. I still need to get the details finished - putty, sand, and paint the seams, caulk the edges.  It looks good, though it definitely looks like it was done by someone who has never done it before. Even though I didn't finish all I wanted to before school started, it wasn't by lack of effort, so I'm OK with it. Here's one corner, where you can see the threshold and the crown molding.


I still have plenty of projects to do inside over the next several months, but none are as difficult as what I have finished. They are just time consuming. So I'm in good shape to have the inside where I want it and I can work on the outside next spring/summer.

My vacation was sweet, but too short. I want to give that a separate blog some day. But the big thing that dealt a huge blow to my summer happened pretty much my first day on the road. The AC at my condo went out, so I had to get the fixed while I was still on the road. I wasn't in a good spot to get multiple bids or to do any real research, so it cost me a lot more than it should have. It sucked.

I still haven't gotten to The Wire yet. That's because Netflix started streaming Mad Men. Given the Netflix history of things suddenly disappearing, I wanted to get that going first. I just got to the fourth season. It does take a few episodes to get into, but it's worth it. The third season is great. I hope to complete that in the next week or two and then start on The Wire. I also finished Breaking Bad Season 3 right before the fourth started a few weeks back. That's the best show on TV right now. Freakin' amazing.

My gym membership expired a couple weeks back. The work I've don eon my house has actually been the best exercise I've had, but I need to get something going soon. I did a pretty good job of going regularly before it expired. I don't want all that work to wither away, though. Or, more likely, add on the bad pounds.

I didn't end up with the beginning journalism class, so there was no cool curriculum to develop. I had a few cool ideas, though, and I'll do those in the yearbook class as time permits.

So now?  New school year. We're four days in, and it looks to be a good year. I don't seem to have any nightmare classes like my fifth period class last year. That should make for a less stressful year. But I do have yearbook, so that will be a different kind of stress.  We're already late with one deadline, so not the best start.  Other than that, the most important thing to do with the beginning of the school year is to start planning the next summer.
Created by His Excellency Kaboom32 at 4:39 PM 1 comment: