Gentleman's Agreement is about a journalist who goes undercover as a Jew to investigate anti-semitism in post World War II New York City.

Let me quickly mention that it's a really good movie. Gregory Peck is great. Philip Schuyler Green is a different character than Atticus Finch, which is all I really knew about him before this movie. But the different characters have the same moral compass. I was expecting to write more about that and about director Elia Kazan and his role in the McCarthy hearings. But as good as the movie is (take a look at where I ranked it at the end), it's the overall theme that is so important.

I kept thinking about how watching Gentleman's Agreement so soon after Charlottesville and the national discussion involved serendipitous timing for me. It's so relevant. But then, and perhaps it was the history teacher in me, I realized that it didn't matter that I saw it now. It was timely when it came out, of course. It was timely in the 1960s. It will be timely today, was yesterday, and will be for far too long.

After watching the previous Oscar movies, I had expectations going into the movie (my prejudice?). I knew as much as my second paragraph above and nothing more. I had an image in my head of what this movie was going to be. They were going to call out the people who use anti-semitic words, don't hire Jews, and every other big stereotype. And they do. But they also call out those who sit back and allow it to happen.

One of the characters talks about sitting and listening to someone tell a joke filled with racist jokes. She describes how angry she was. She describes how hurt she felt. She states that she and several others felt uncomfortable. The response from the other character, who is Jewish, was simply "What did you DO?" That's all he keeps repeating. It works and gets the point across in the movie, but one that still hasn't spread.

Yes, you can absolutely watch this and replace "Jewish" with "Muslim," "immigrant," "black," "gay," or any other term that you are glad you aren't. Gentelman's Agreement discusses, though doesn't use the exact phrase, Christian Privilege. The same arguments work for White Privilege. If you are white, have heard the phrase white privilege, and still believe you don't have it, or just still don't understand it, this movie might be a good way for you to still figure it out and let it sink in.

If you're still supporting 45 even after his difficulty in condemning Nazis and those sheetheads, the KKK, and people are calling you racist even though you're only supporting him because of the economy, this movie might be too much for you. That's because you're wrong. You're on the wrong side of history. Your Facebook posts are Hazel Bryan's face.

But I did use the word "might." Hazel changed. Orange Julius Caesar still has plenty of time to do irreparable damage to the nation and to your place in history. you're wrong and you're running out of time. 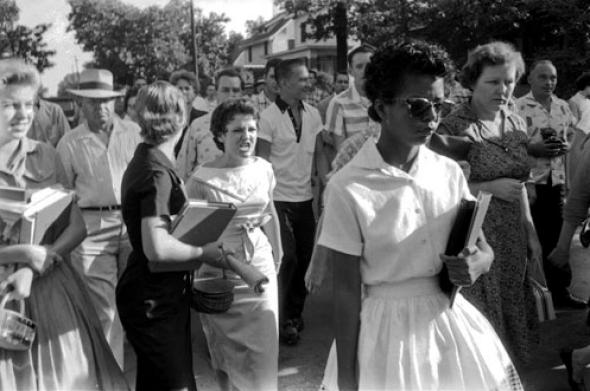 Created by His Excellency Kaboom32 at 8:42 PM No comments: