I haven't blogged in awhile, so this is a general update of a bunch of different things.

The end of the school year is quickly approaching. We have 10 days remaining. Of those 10, I will spend one at Six Flags Discovery Kingdom, one at the eighth grade pool party, and one is the last day, which is on a Monday. (Yes, for those of you who aren't involved with the school district, our last day is on a MONDAY. Does that tell you all you need to know about the level of stupidity of those running the district?) So yeah, there are really seven days left. But I have to wake up 10 more times, and that's what counts the most.

As I wrote about many months back, I set trying to lose some weight. My original goal was to lose 20 by 2010. I barely missed that, but I've made up for it. I've now lost over 30 pounds. I feel much better and probably look better too. I still have a year and a few months of gym membership, so I'm not done yet. I'm moving on to new goals and I hope to have a fairly active summer (physically, at least, as I won't really have money to do much else - more on that soon).

Here's a note about human psychology. I think one big reason that I've done so well is my limited gym membership. I picked up the Costco deal, which is two years for $299. The alternate would be to join a gym on a month-to-month contract. But in this deal, I'm limited to 24 months. After that, I have to pay up again if I want to continue. So I never had the "I'll get going next month" mindset. I knew going in that I had two years. Period. It's a similar mindset to this idea. What kinds of New Years Resolutions do successful people make? None. Successful people don't need an arbitrary date to be successful. They do it now. So, I did it "now." 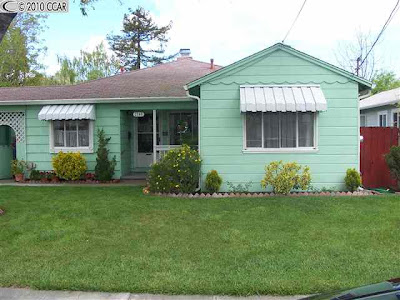 So it looks like I finally have a house. I'm planning to write a good full entry on the entire almost two year saga, so I'll cut that short here. But I'm in contract and heading towards closing on this 3 bedroom, 1 bath in Concord close to Mt. Diablo High. You might be able to see pictures at this link while it lasts. The original contract was a 45 day close plus an option for the buyer to rent for up to 30 original days. Now it trying to close her own deal for the place she's moving to, so that might make everything happen sooner. It looks like all of the potential barriers have been agreed to at this point. So that means I'll be moving anytime from the middle of June to the end of July. I hope we get something nailed down in the next week. That means around that time I'm paying just about every dollar I have saved in the world, so I have nothing to spend at all. But at least I've locked in a 4.5% rate. Suck on that.

My next update ended up being long enough that I made it into its own entry. I should be posting that in minutes.

And hey - anyone want to rent a one bedroom condo on the Concord/Clayton border or know someone who does? Seriously for REAL this time.

Created by His Excellency Kaboom32 at 1:04 PM