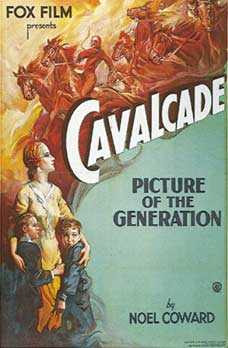 Cavalcade is the movie that I blame for stopping the Oscar Project the first time around. The reason has almost nothing to do with the movie itself. It's that it's not easily available. I found a lousy torrent of it, complete with Spanish subtitles and lousy sound. I realized after a few minutes that I had to rely on my sparse Spanish skills to understand some of the sentences. I stopped watching, and the Project found itself unofficially suspended. I threatened to continue a couple times under the assumption that I could find a cleaner version of Cavalcade, or just pass it by. I couldn't do either. Today, I'm forcing myself to sit down and watch the crappy sound/Spanish subtitled version.

It's definitely not the most exciting movie ever. Cavalcade tells the story of an English family over the course of 30+ years. Starting with New Years Eve 1899, the family patriarch is about to go off to Africa to fight in the Boer War. Expectations are that he will return changed or not at all. A few months later, he's back, and it doesn't seem to have changed him at all. I guess I missed the significance of that.

Years later his son falls in love. He and his new wife go on a cruise for their honeymoon. The date on the screen is April 14, 1912. If you know your historical dates (or James Cameron movies), you know it won't end well. Then World War I happens in a Captain America/WWII style montage. And then some other stuff happened that I didn't pay attention to.

Definitely not worth the wait. Even though it's been a couple years since I watched the first movies, I'm pretty sure that Cavalcade is definitely my least favorite movie of The Project so far. You can check the "Oscar Project" labels on the blog posts to find those. I hope I'm back on track with this thing. If I actually do, I'll be watching the Oscar winner from this year in December of 2013. The next movie, It Happened One Night, I've already seen. It's fantastic, so I know I'll enjoy rewatching it.

Created by His Excellency Kaboom32 at 7:53 PM