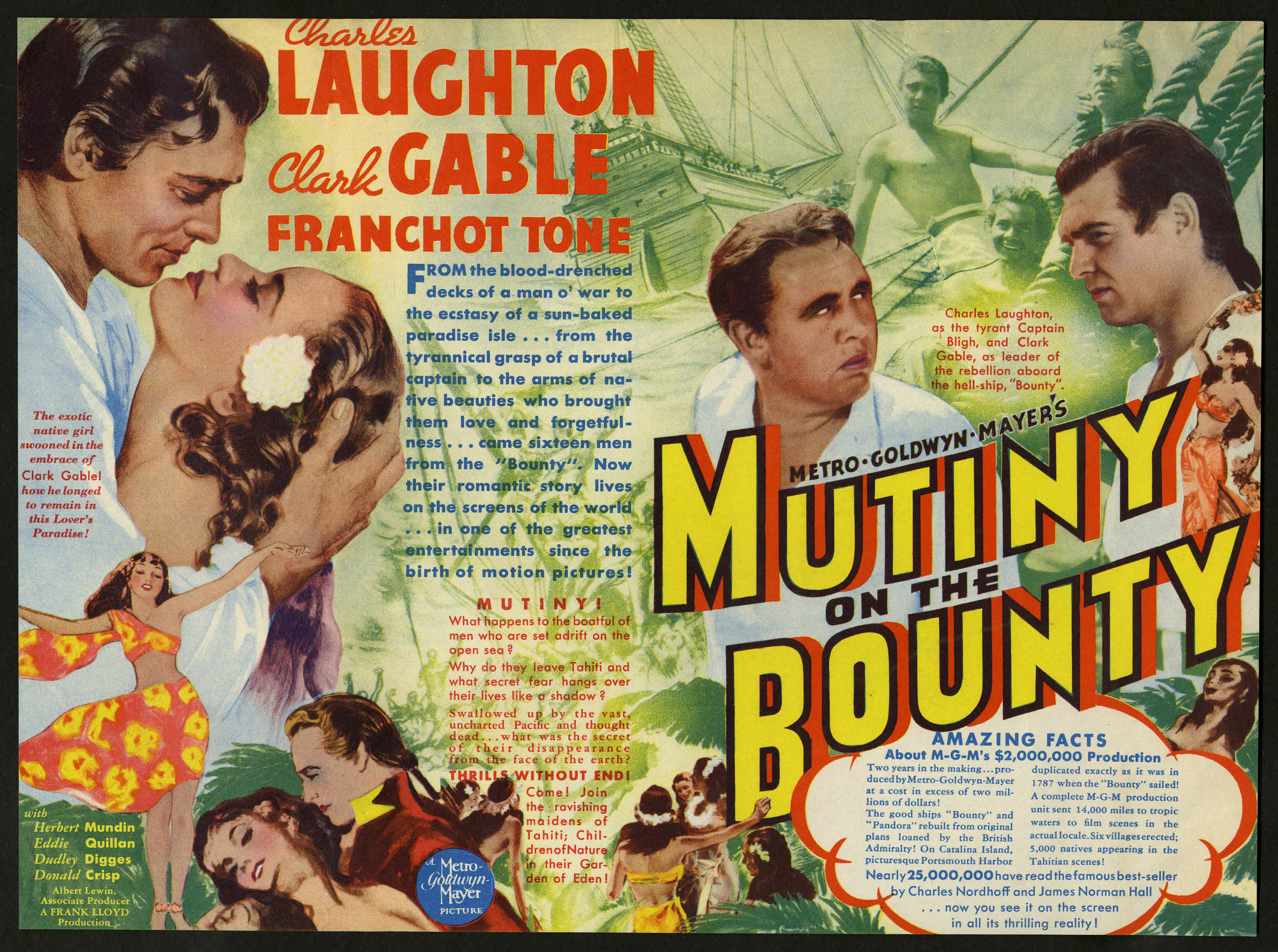 While watching these older movies, I often wonder what it would be like if it were made in modern times. The story of the mutiny has been told several times. In fact, the 1936 Oscar winning version was the third of five movies. But it's the only one I have seen, so I wonder if what I'm about to write it true of any of the others.

The voyage of the Bounty is an interesting story, and the mutiny itself is probably least interesting. In Mutiny on the Bounty, it takes about two minutes of screen time, and that's about all that's needed. I believe that if it were made today, the mutiny would be almost the entire movie. It would probably be filmed with extra shaky cam and featuring impromptu martial arts displays from the various mutineers. The size of the interior of the ship would be filled with endless hiding places and individual set pieces.

Mutiny on the Bounty is too long at 132 minutes, but it still moves along well enough. As I mentioned, the mutiny itself is done quickly, and is almost the only action piece, minus a threatening storm or two. The story moves along with the slowly building tension between Captain Bligh and the others. Once we finally get to the mutiny, it makes sense. It works. We even wish it had happened earlier. I think that would be missing from a modern version.

For the second week in a row, I can write that Clark Gable is great in this. And he plays a different character than in It Happened One Night. His acting range is pretty darned good, especially for the mid 1930s, when much of the acting is overmelodramatic, if such a thing is possible. I'll see Gable again in a few weeks, but he won't give a damn.

And what about Captain Blight?  Some quick research shows that the movie character wasn't much like the reality. The real cause of the mutiny probably wasn't the same as in the movie, and isn't really clear. But we're talking about the movie.

What he really such a horrible guy? Did he deserve the mutiny? Well as I mentioned, we understand when it gets to that point. But I don't think he's so evil as he is just a dumb guy with too much power. The movie makes the point that he was a brilliant Captain. The voyage was a difficult one that he made much easier with his mad skills. And most of his decisions are made with the voyage, as well as King and County, in mind. The problem is that he isn't smart enough to the take the best path, only the one prescribed to him. So did he deserve the mutiny? No, but the men who did deserved to mutiny, and in the end that's all that matters.

P.S. Just before publishing this, I remembered that since I had watched Mutiny on the Bounty as one of the AFT Top 100 movies, I had already written a bit about it. I went to check it out. As it turns out, My opinion remained almost identical, just with fewer words. Here it it:

March 28, 2004 - Mutiny marks movie #100 for me - the last movie to watch... Overall a good movie. At over two hours, it moved along well enough without rushing to the mutiny itself. I think that if it were made today, the mutiny would have started about 45 minutes in - and then taken up another 45 minutes worth of special effects to actually do it.

Created by His Excellency Kaboom32 at 5:11 PM