1. I went to hold a sign on the corner of Treat and Oak Grove this evening. Actually, I leaned it against myself, as I'm too lazy to hold it up for any length of time. We had lots of honkers driving by. Later in the evening, the Yes on 8 people moved in closer. For awhile, it was actually a cool sight seeing Yes and No signs all mixed together on one corner. It was a great image for the First Amendment. In other countries, and perhaps in other states, that would have broken out into a fight or worse. I was hoping that they might join hands and start singing "Yes and No together..." But they didn't.

One guy did come out of his nearby apartment to see what was going on, so I talked to him about a few issues, not just Prop 8. He seemed to barely be aware that there was an election tomorrow. It wasn't actually that bad, but he said that he hadn't taken the time to read about any Props at all. I did send him to talk to the Yes on 8 people, though, too. At the time I did it out of fairness. But after the part I will talk about next, I'm sure that anyone with a brain will be less likely to vote Yes after talking to a supporter.

So the most surreal part of the night was when we were heading back to the car. These Yessers starting telling us that we were on the wrong side. Then one guy started rapping. I can't explain it beyond that, because there's no way I can do that moment justice. Perhaps Lance can explain it further. Let me just say that the moment showed that there really is no argument for Prop 8. None. They were holding the Prop 8 = Free Speech signs, but couldn't explain it.

2. So why was I, a straight guy, out holding a sign for No on 8? In my mind it's because I'm about rights. I have lots of themes in my writing. When it comes to fiction, I'm usually about the character. When it comes to politics, I'm usually about the Constitution and individual rights. That's one of the things that made blog-a-day month so difficult. I don't want to keep repeating the same themes.

But you know? There's a better, more personal, greedy reason why. You might have read this before: http://en.wikiquote.org/wiki/Martin_Niem%C3%B6ller If you don't want to click it, it's the short quote that talks about "When they came for..., I remained silent." Click and read if you don't know it.

So what am I worried about? Well, nothing really. But this evening, this image started to circulate the internet. 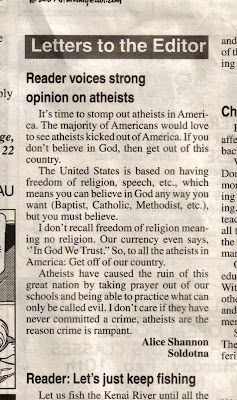 Yeah. That mentality is actually somewhere out there. (Where specifically? A quick internet search shows Soldatna to be in Alaska. That's some crazy, misinformed, ignorant shit. And people believe that.

3.
Standing in the rain,
Do I think that it mattered?
Relativity.
Created by His Excellency Kaboom32 at 8:04 PM

I know you qualified the statement with "usually", but when I thought about your fiction, I was immediately hit by your story (or series of similar stories) in McNamar’s circa 1989-90 used to fill the “write for 10 minutes” requirement titled Lucky Guy (or similar) (note: I opted for italics as the comment tool is not accepting underline tags!) which consisted of a list of lucky things followed by (spoiler alert!) one unlucky thing (nice long sentence, huh? I’m going to need more than one to finish the comment, though). Don’t get me wrong, I liked it enough to both remember it for nearly twenty years AND to plagiarize it for a couple weeks of my own writing commitments, but I don’t recall it being very character driven (in fact, I believe we learn everything about the guy in the title…which I may or may not have even remembered correctly; maybe a clue in and of itself).

I agree 100%. That seems to be the biggest thing that's slowing down my writing, that's forcing me to censor myself. I never developed the ability to create good characters, but that's what I want to see more than anything else. It's killing me.

If you haven't read Steve Martin's Pure Drivel, you should treat yourself (if you have the time, I even recommend listening to the audio book of Steve Martin reading it). It has a chapter titled "Writing Is Easy" which contains a section specifically about creating memorable characters which may be of particular interest to you (by 'interest,' I mean 'funny,' not 'helpful.')