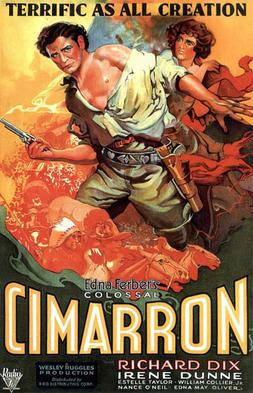 I'm choosing to leave the image of the poster centered and alone because it's pretty awesome. And most importantly, I believe it was made by someone who hasn't seen or known anything about the movie.

Cimarron was watchable. I didn't fall asleep and I didn't need to watch it in parts. That's the good thing. I think this is because the scenes are all fairly short and enough happens in each scene to keep it moving. There are some pretty cool shots, including the very beginning, showing the Oklahoma Land Rush. There's also a pretty good scene in a church.  I'm sure you're asking how a church scene can be good. End it with a shootout, that's how.  It ends with the best line in the movie. When asked, "Did you have to kill him?" The main character Yancey Cravat answers, "No, I could have let him kill me."

In reading about this movie, I discovered that it received a lot of attention because of its racist overtones.  There isn't anything even close to Birth of a Nation here. The worst of it probably involves the black kid who is basically a slave. Yancey says about him, "That's loyalty that money can't buy." Later the kid is killed trying to rescue some kids and no one notices or even remembers that he went to go rescue the kids. But then Yancey, who had just been shot in the arm, carries him for awhile. the other racists stuff isn't from the movie but the characters. If anything, it seems fairly progressive for a movie from 1931.

I can give Cimarron a better recommendation than either Wings or Broadway Melody. But beyond that, I don't see too much of a reason to watch. Even a movie buff who wants to see  history of film making can skip it, I think. There are a few characters who are basically parodied in Blazing Saddles, but the same basic characters appear in other westerns, and there are better westerns out there. My favorite? High Noon.
Created by His Excellency Kaboom32 at 4:54 PM