For whatever reason, I decided that I'd go ahead and post my summer goals. I'm planning to move into my house in the next couple weeks. There's lots of stuff that I have to do with that, including renting out my condo. I don't want this to have anything to do with that business, as that will take care of itself.

1. Exercise. My original goal for the summer was to shift into more of a weight lifting mode to add some good bulk, as opposed to the bad bulk I spent 10 months getting rid of.  Then a couple days in I tweaked my shoulder. It's nothing bad, but it's throwing a monkey wrench into my plans, and I had to revert to strictly cardio for a little while. So my basic summer goal is to go FULL MACHINIST.

OK. maybe not. So my goal for the summer is to hit the gym five times a week. I was doing that easily during the school year, so it shouldn't be too much of a problem. I just know that when I move into the house and start working on that, I don't want to lose touch with it.

2. Creativity. Since I've been waiting so long for the house,  I have become stagnant in creativity. My art supplies and music stuff is all in storage or moved out. So this goal has two parts.

The first is that I want to write 500 words of fiction every day. This is a goal that I've set in the past and haven't met because I have too many filters. This summer I've rewired all of my filters. I've now set out to write the most boring novel ever. That means I don't have to worry about any filters standing in my way. At the least, I'll get in the habit of writing. At best, I'll bore my creativity and force it to start working. Maybe something in this novel might jump into something real. Perhaps the character will begin to realize itself. In the first chapter, Jack took out the trash. Second, he walked down to the coffee shop. Tomorrow I'll write about him ordering coffee and reading the paper. He might even start drinking the coffee. I played with publishing this novel online, but I don't know. It really is meant to be quite boring. I'll only do so if the masses demand such a thing. 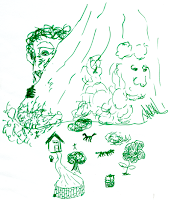 The second is that I want to create art. When I move into my house, I hope to create some pieces of simple abstract paintings to hang. Then as I create more complicated work, I'll replace those. For now, I'm just going to create one small piece of art every day. But once again, I'm rewiring the filters. All I'm doing is grabbing a blank piece of paper and something to write with. I'm giving myself about five minutes to make marks on the page, then it's done. Once I have my paints, I'll give myself more time. And I want to take some photos and work with some other media eventually. But for now, just these stupid, bad sketches. I'm posting them in my Facebook account under the album "BadArt."

3. The Sopranos. I just finished Season 5. I'll start the final season tomorrow. I have a couple other shows waiting for me to watch, so when I finish this I'll get going on those. I actually have a ton of TV shows and movies sitting on my computer that I've ripped from Netflix disks over the past few months. I really need to get my hard drive cleaned off, so I'll be watching lots of stuff this summer. Yeah, I'm throwing myself a nice, slow softball here. It's summer, and I could use a victory about now.

4. The Oscar Project.  The first two movies, Wings and Broadway Melody, weren't winners in my book.  But All Quiet on the Western Front was pretty darned good. Here's the schedule for the rest of the summer:

There are a few movies that I've only heard of when looking at the list of Oscar winners, so I don't really know what to expect. I've only seen three of these movies.