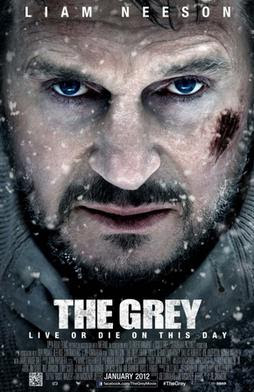 Movies are made for certain audiences. I don't just mean movies for kids, tweens, women, men, or hermaphrodites. I mean for people who have had certain experiences. I don't always know what those experiences are, but there's an easy way to identify those movies. Many people will simply say that they just didn't get it. Not in the lack of comprehension of the plot, but they just didn't get why other people liked it. The example I always think of is Lost in Translation. I don't know exactly what it was, but it resurfaces when you watch the movie.

The Grey is an example of a movie that I saw but DIDN'T experience whatever it was I was supposed to experience. These guys walk through the snow while being stalked by wolves. I've read reviews and lists of people who absolutely loved it and felt a deep connection with Liam Neeson's character. They understood his relationship with faith and some sort of God. I just never got it. It didn't connect with me. But there was something else that pulled me out of the movie.

Early on, one of the characters talks about the myth that more people are alive today that have ever existed on the Earth. I spent the next several minutes just trying to do some math in my head. It just didn't add up. Also, I was pretty sure that I had heard that myth debunked before. So when I got home, I had to check it out. It turns out that using science and math, people have calculated that the total number of people to exist is much closer to 100 billion. The website that I found and linked to above was dated about the same day that I saw the movie, so I wouldn't be surprised if the article was prompted by this stupid movie. 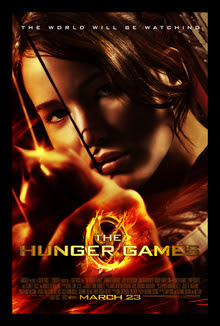 I hesitate to list The Hunger Games as overrated, since the only people who rate it highly are girls approximately aged 12-14. But when it came out, that's who I had to hear about it from. Also, I read all three books. After finishing the third, I dared to post on Facebook a bout how shitty it was. And I was rebuffed by actual adults. They were wrong.

So first, I feel that a quick review of the books is necessary here. The first book was decent. It was, as are all three, quick reads. It's filled with flaws, but it's an interesting enough story. The second book is pretty much the first book all over again, but the actual Games are more interesting. The third book takes it's own course. And it completely falls apart.

The third book (minor spoilers) is about the war between the little city things (notice my lack of interest in doing 30 seconds or research to find what they were called) and the big city government. But it's not fought the way a war is fought. The battles aren't like battles. It reminded me of a middle school student trying to talk about the Civil War but not even understanding the difference between a war and a battle.

Then there's Katniss (slightly bigger spoilers, but still minor, ahead). She is basically worthless in the movie. In fact, all she does is get injured and get in the way. While reading it, I was reminded of the movie Robot Ninja. His line in the movie is "I am the Robot Ninja, and I kick ass." First and most importantly, he was neither a Robot or a Ninja. Second, he never kicks ass. He gets his ass constantly kicked. So his line is a complete lie. All Katniss does in here is get her ass kicked, and if not, getting in everyone else's way. It's just garbage.

What about the movie The Hunger Games. It honestly wasn't too bad and was entertaining. I promised that this year I wouldn't write about how distracting the SHITTY SHAKY CAM is in movies, so I'll ignore how that almost ruined the movie going experience, as it so often does. Will I see the other movies? I don't know. I think the Games in the second could be entertaining if they don't change it too much from the books. But the third? I think it would be horrible. They're breaking it into two movies. I can't imagine anyone being interested in that. I should point out that a lot of people who really liked the first two books have told me that they had trouble getting through the third.

Prometheus was highly anticipated as having some kind of connection with the Alien movies. Visually, it's a beautiful movie. However, it tries to ask a lot of philosophical questions about the origins of man, both in this particular mythology and in our world. And it fails to deliver any kinds of answers or even anything to actually think about. It's a lot like Lost. And not so coincidentally, Damon Lindelof, Lost showrunner, was heavily involved with the script. The difference is that I actually enjoyed the journey on Lost, and I think that's what ended up being most important (until you start to ask WHY there's a box somewhere on the island that they can pull Locke's father from and apparently anything they want but is never referenced ever again). With Prometheus, I found the journey lacking in entertainment and frustrating due to my lack of understanding of what it was trying to accomplish. 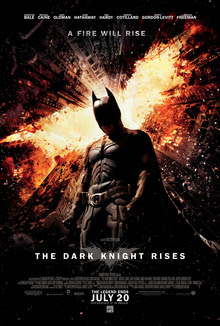 I  wasn't going to put The Dark Knight Rises on this list. Ultimately, I decided that I wanted to give it more than a couple sentences. The movies in the middle aren't going to get much more than that, so this is a chance to highlight it a bit. I feel like I need to mention more about it out of reverence to the previous two movies. I listed Batman Begins as my number 4 in 2005 and The Dark Knight as number 3 in 2008. To be honest, I REALLY liked The Dark Knight Rises. I was entertained all the way through. I applaud Christopher Nolan and company for really reaching to put the third movie over the top.

But that's where it falls apart for me. It went way too far over the top. Bane takes an entire city hostage. That's really reaching - ambitious for both Bane and Nolan to allow that to happen. But then comes the part that I can't get past. The gap of several months where he continues to hold the city hostage. MONTHS. Forget Batman. How long could that actually go on without any real resistance from the outside? And it's the DC Universe, so somebody else would show up to do something.

And after a few months, the police emerge from underground fresh and clean and ready to fight. Batman has another fist fight with Bane.It's just too big for this movie, and I couldn't move past that. Many of the other things people complained about I was fine with. The" This isn't the real Bruce Wayne/Batman" argument didn't work for me. First, he's fictional. Second, which version? Third, this is the real Batman from these movies. And the ending? I didn't find it ambiguous, and I liked it. I'm greatly conflicted.

I wrote more about these four movies than I planned to, so I'm splitting this into two parts.

I saw The Grey on Netflix - enjoyed it, but I didn't absolutely love it. Just thought it was an entertaining above-average action movie.

As for Bane taking the city hostage for a month, I guess they wanted to create an epic scope and give Bruce Wayne enough time to heal from such a debilitating back injury. It's kind of like The Odyssey. Yeah, it doesn't make any sense that he's gone for 20 YEARS, but it just makes it all much more dramatic.

Oh, but you did get one thing wrong here: "And it's the DC Universe, so somebody else would show up to do something."

Actually, the world that they set up in Nolan's Bat-films is that Batman is the only superhero. It's definitely not the DC Universe. It's like an Elseworlds.

Yeah, stupid. It's an Elseworlds. Dummy.