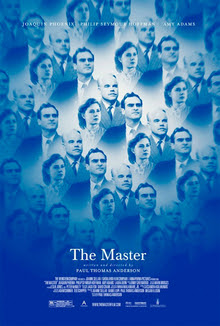 I was really looking forward to The Master.I like Paul Thomas Anderson quite a bit. There are scenes in Magnolia that have drilled their way into my head. Punch Drunk Love is easily the best Adam Sandler movie. I don't know if I fully appreciated There Will Be Blood, but Daniel Day Lewis is remarkable.

Anderson gets great performances. Even Marky Mark's wang is impressive under his direction. So with Philip Seymour Hoffman, Amy Adams, and Joaquin Phoenix starring, you knew the leads would be great. And they are. Give Joaquin the nom for best actor (though the award to someone else I just mentioned). The processing scene (if you've seen it, it's the one where Phoenix can't blink or they start over) is brilliant, and both Phoenix and Hoffman shine. There are other things that Phoenix does in the movie where you can tell that he's totally immersed in the work. There's something brilliant happening.

That's the problem. The word "something." Because even though everyone in this movie is totally in the movie, totally in the moment, I have NO IDEA what it's about. I don't know what happened and/or why. Clearly, there's something related to Scientology. But what? What's the point? What's the message? What's the plot? Is it possible that PTA had this idea for a movie but didn't want to get involved with the litigation of Scientology?

That has to be the only explanation. The Master feels like you're watching someone else's inside joke. They're totally in on it, but there's no way you'll understand. And even if they can explain it, they weren't there. You know? This is a drag. 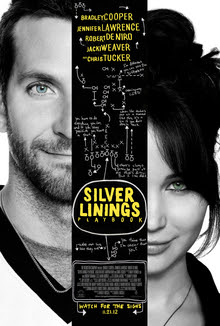 Silver Linings Playbook is getting a lot of Oscar talk, and that needs to stop. People are talking about Oscar noms for the two lead roles, Bradley Cooper and Jennifer Lawrence, who makes her second appearance on my overrated list. I thought both were bland in their roles.

In fact, take a look at the movie poster that I've placed over to the right. Look at their half faces. They are both showing more charisma in the poster than they did in the movie.

I had problems with the end. (Vagueness ahead to avoid spoilers) The choice made at the end is too easy. Given everything else happening in the final scene, given everything else leading up to the final scene, I just don't see him making that decision. It's not even that one decision is clearly right or clearly wrong to the viewer and we can see he made the right decision.

Most likely, though, my biggest problem with the movie is that you have to root for the Philadelphia Eagles in order to root for this family. And that's a line I just won't cross. 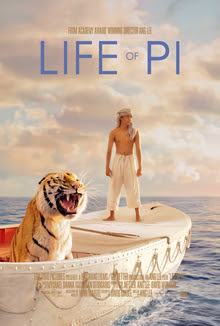 As I've mentioned with a few of these, Life of Pi is a good movie. Visually, it's brilliant. Storywise, it's a bit slow. Character wise, the tiger is probably more interesting than Pi. On the raft, at least.

Pi is actually an interesting character in the lead up. The way he deals with religion is fascinating, and I actually want to see a movie about that character who makes it safely to Canada without having to share a raft with a tiger.

On the raft, as I mentioned, things are visually spectacular. I saw it in 3D (a rare moment of weakness, I know). The theory is that in 3D you really get the depth of the small raft and just how close these two are as they make their way across the ocean. I don't think it added anything to it (as is typical for 3D), and I would have been just fine without it.

But how much time can you really spend on a raft? With a tiger? Not as much as they gave to Life of Pi. There's a reason why Tom Hanks is on the raft with Wilson for just a few minutes. That's just not as interesting.

One final problem I had is that it contains a fatal flaw. In a movie, book, TV show - whatever - you can't start by telling the reader/viewer how much they're going to like the story. The best joke is the joke that you don't know is a joke until you hear the punchline. How many funny jokes start with, "Here's a funny joke." Because then you've raised expectations too high.

Life of Pi starts by basically telling us that this story is going to be amazing. But even worse, here's how they say it. "He said you had a story that would make me believe in God." If that book with the talking snake didn't do that, the tiger on the raft won't either. 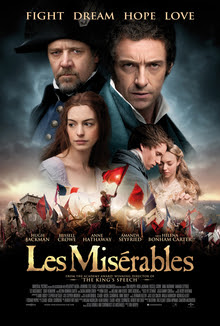 And that brings me to the last movie I saw in 2012. Before I get into it and start getting my fictional Facebook dislike button pressed, answer this question to yourself. Did you really like Les Misérables, or did you really like the music?

On on middle school Washington, D.C. and New York trip that I lead, we go to see a Broadway show on one of the evenings. One year, we saw Les Misérables. I remember enjoying that much, much more than Phantom of the Opera, Legally Blonde, or that really crappy ABBA thing. I remember being impressed by the sets and how something so big fit on the small stage. And I did enjoy the music.

I can't remember exactly how long ago I started seeing the trailer for Les Misérables, but when you watch as many movies as I do, you see many trailers over and over. It feature Anne Hathaway singing I Dreamed a Dream. And you know what? That's a really pretty song. It's beautiful, in fact. And it's an emotional song. And it's super-duper catchy.  And I would continue to hum or whistle it the rest of the day. I would sing it, but I don't really know the words. I think it goes something like this. "I dreamed a dream of dreams and dreams. I have a dream today of dreaming. Free at last, oh free at last. I dreamed a dream, we're free at last."

So that little ear worm actually got me to the point where I was anticipating the movie and looking forward to it. But something on a stage just doesn't translate to something on the big screen.

Director Tom Hooper made a bizarre decision, I think. During many of the big solo songs, he filmed the actors (and I make the distinction between actors and singers, which I'll get to in a moment) in an extreme close-up of their faces. I guess the reasoning is that on stage you can't see the expressions on their faces, so this will give them something different.

When you give a long, extended close-up of someone singing emotionally and trying to cry, their nose runs. And it's a bit gross to see this clear line of 10 feet of booger running into a gigantic mouth. Try not to look at it while Marius sings with his Muppet voice.

This extreme close-up idea probably works best in the previously mentioned I Dreamed a Dream. It is a very emotional song, and Hathaway does a good job with most of it. But it ultimately didn't work for me for two reasons. The first is that she's an actress, not really a singer. So she's trying harder to act than to sing. The song suffers when she forces the louder parts.

But more importantly, Hathaway performs the song soon in the movie after getting her hair cut off. And there's an extreme close-up on her face for an extended period of time. And she cries a bit. And I couldn't think of anything except THIS. Nothing compares 2 it.

Russell Crowe. Here's what I thought everytime he would sing. "It's a good thing Gladiator wasn't a musical." He's rather awful.

Hugh Jackman. Here's what I thought everytime he would sing. "Maybe Wolverine should have been a musical." He's actually pretty good. His character of Jean Valjean proves that in 19th century France, money can't buy happiness. But it can buy a toothbrush.

Amanda Seyfried. It makes sense that she was cast as Anne Hathaway's daughter. They both have those creepy, oversize, bulbous, horse-eyes on the sides of their heads.

The absolute best performance of the movie is Samantha Barks as Eponine with On My Own. She's clearly the most talented singer. A quick bit of research shows why. She actually performed it on stage. And finding that bit of information makes me wish that they would make a version of this movie with an actual stage cast and a different director.

I think it needs a few more changes, as well. It needs to be edited down. On Broadway, we mercifully have an intermission. The movie is way too long. In that version we played in high school, the medley ends with Do You Hear the People Sing? When I heard the people sing that, I was really hoping the movie was about to end as well. Nope. I continued to hear the people sing for quite a long time after.

I was also turned off by the "dialogue" between the big numbers. They sing the lines. Sort of. They certainly aren't saying the lines. On stage, it works. On the screen, it's annoying.

Here's the deal with Les Misérables. As I write this, I'm still whistling the music. And I have been for the day and a half since I saw it. I like the music. I don't like the movie.

Created by His Excellency Kaboom32 at 8:29 PM