Something good about the 2013 movies? There weren't any movies that I really hated, such as The Tree of Life, Benjamin Buttons, Babel, or The Lovely Bones (Brad Pitt gets 3 out of 4 on that list) from previous years.

Something bad about the 2013 movies is that I didn't see any documentaries. I only saw one foreign film, though I saw two with subtitles. The foreign film was Amore. I wrote about it here after seeing it in time for the Oscars. I think I still stand by that review.

A few movies I saw this year weren't bad, but they were possibly something worse: forgettable. Usually, I keep track of the movies I see as I see them. I didn't this year, and had to go back to a list of movies released to remember all of them. There were a few that I even scrolled past at first.

Blue Jasmin was the first of these. I guess this was more about expectation, though. Woody Allen has made some pretty good movies lately. And this one stars Louis CK? I'm in. Well, it doesn't star Louis CK. He's probably in three scenes. The rest of the movie was good, I guess, but I don't remember too much.

It's a Pixar tragedy that Monsters U was also in the forgettable category. I've generally enjoyed everything they've made without Cars in title, so it's rather sad that I barely remember anything about it.

The Book Thief was good, and I've even offered it as extra credit for my World History students. But perhaps its forgettability is worst for a couple reasons. I just saw it about a month ago, and it's a WWII Holocaust movie. You shouldn't forget that type of movie.

Next are the movies that I at least remembered I had seen, but didn't really care that I had. I think I spent more time watching The Great Gatsby looking at the sets and style that I did caring about the characters or what was going on. And I don't meant that I loved the style, either. I spent the time during the party scenes thinking about what a nightmare that would be to go to. After all, one of the best reasons to time travel back to the twenties would be the music. Why mostly leave that out? 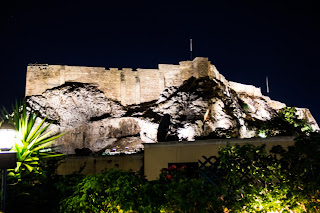 In most years I wouldn't have seen Now You See Me. There's only one reason I saw it. See the picture to the left? That was my view to the left while I watched it. I took that one during this movie. One of the popular evening activities for locals in Greece is the outdoor theater. This one was on a roof with an Acropolis view. How was the movie? It was surprisingly entertaining.

I read Ender's Game for the first time earlier this year. The movie was a pretty faithful adaptation once you factor its time constraints. I wonder if it might have been a flaw, however. It didn't do anything to establish its own personality.

I didn't care much for Iron Man 3. I guess I liked it better than 2, but that's about it. Mostly, I didn't like The Mandarin. I thought the comic version, I guy with magic, was a great foil for Iron Man, especially after the Avengers. His fight with and alongside Thor gave him conflict about his very neat, scientific world. The whole alien invasion left him even more messed up. How about we throw even more non science at him? The two arguments I've heard are that the comic version would be too racist (woudn't that be easy to fix?) and that magic wouldn't fit in this world (then it isn't the Marvel Universe, is it?). Perhaps I didn't like this enough that the rest of the movie became more... forgettable.

I'll write about the movies I liked more (but still didn't make the list) later today.

Created by His Excellency Kaboom32 at 2:51 PM

I agree about the Iron Man comment - why not some magic?

I actually liked Monsters University more than the first one. Part of the fun in seeing that one though was that it was Logan's first movie in the theater.