I left this off of the last post:
Man of Steel was a good enough superhero movie. It just wasn't a very good Superman movie. It quickly became clear as to why he no longer had his underwear on the outside of his pants. That's because when you get your panties in a bunch, you don't want to wear them anymore. I'm cool with the brooding, moody superhero. But this wasn't Superman. I have plenty of faith that Ben Affleck can be a good Batman. I have little faith that Zack Snyder can make a good movie, and I wish Affleck had been tapped for that role instead.

Now to the better films.

The last superhero movie this year was Thor: The Dark World. I thought it was the best of the bunch, but it didn't have much with which to compete. It was fun and funny. It continued the storyline of the character between Avengers films. It did what it needed to. I wonder if these movies are too big, and that they really have to be. While Asgard is a great change of pace, I would like to see more of the god on Earth type of thing. Have Thor take on some of the Marvel Universe villains (how about Thor versus the Absorbing Man?), but keep the focus on something smaller. He doesn't have to save the universe each time. This goes for all of the Marvel movies. Save that for the Avengers.

I'm enjoying the new Star Trek movies. Star Trek Into Darkness had an interesting enough take, and Benedict Cumberbatch can do no wrong. I'm not a big enough trekkie to compare these, but I can tell you that as long as this cast is on the Enterprise, I'll keep coming back. They nailed each character.

Anchorman 2: The Legend Continues had no way of living up to the first movie. I accepted that before watching it, and it helped. There were a few funny parts, but nothing as quotable. There were a few long stretches between laughs. But the funniest scene (which was also the funniest scene in the first movie - funny how that works) was pretty darned funny. It features one of the Jacksons.

Last year, I forgave the length of The Hobbit: An Unexpected Journey. I think it's because of the LOTR films, which I loved. But in The Hobbit: The Desolation of Smaug, I just couldn't sit still. Everything looks great. Everything is fun. But there are just... so... many... details. I haven't read the book since fifth grade. Is there really enough left for another movie? I'm definitely not the first or last to say this: It would have made a REALLY great single film. 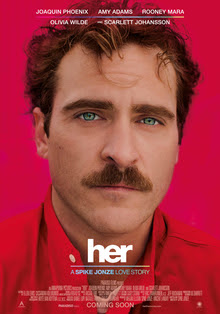 Saving Mr. Banks is going to be a top choice for people who don't really see a lot of movies. I say that in the most condescending way I possibly can. While watching it, I got caught up with it as well. It's a good movie. There were plenty of tears falling in that theater. But here are two reasons why it can't be great. First, Tom Hanks... isn't very good. With most actors, you can forgive it. But I can't with him. Sorry. The second reason is very similar to my critique of Les Miserables last year. If you loved Saving Mr. Banks, it's probably because you liked the music. But the music was from a different movie. If you got a little teary eyed during Feed the Birds, it wasn't because of this movie. It's because of Mary Poppins.

Her is a cringe movie. You won't feel comfortable for the entire movie. When you start to feel comfortable, you notice it, and it's not OK. And yet, I still have to say that the movie is quite... beautiful. Perhaps that says more about me than the movie.

American Hustle tried really hard. It tried too hard. And everything is technically good about it. The story is fine, the acting is really good, and it looks great. But it doesn't quite come together. For me, it was the music. Partway through I thought about how good the soundtrack was in representing the late 70s. As the movie kept going, they crammed in more and more songs that would make a great soundtrack. But it started to become a parody of itself. It started to become - how many late 70s songs can we license and cram into this movie? Apparently, all of them.

The Wolf of Wall Street is definitely a Martin Scorcese film. You won't mistake it for anyone else's work. Unlike in American Hustle, he knows how to grab a song from the time period and make it stick to a scene. Everyone is great in this. I was concerned from the trailer that Jonah Hill was just playing Joe Pesci. He sorta does, but he also has his own thing going on. There are shots of Leonardo DiCaprio where he looks a lot like Orson Wells in Citizen Kane.  If  five weren't such a nice round number, I would have made it a top six list and started with The Wolf of Wall Street. It's a three hour movie, but it didn't feel much longer than two hours fifty-five.

Inside Llewyn Davis is a cool little Coen Brothers film. I use the word little carefully, as each Coen Brothers movie feels intimate. Their movies really are about people. They are about the characters and not as much about what happens. But some of their movies feel bigger. This really is about one guy. Sure, there are other characters. But it's about Llewyn Davis, a struggling folk singer in the early 1960s. The big conflict you will have when you watch is whether to actually root for him or not. All I could think of while watching was this story from The Onion. And then I just wanted him to get some kind of day job.