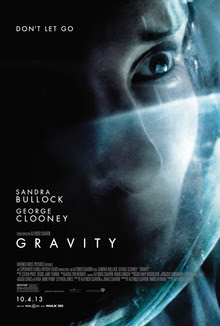 The trailer and the hype didn't get me for Gravity. Looking back, I don't know if I ever saw the trailer in the theaters. I didn't see a lot of movies in the season leading up to it, so I probably saw it on a small computer screen. Or maybe just a commercial.

But Gravity is one of those movies that really needs a big screen. If you haven't seen it in the theaters yet, there's still time. I even wish I had seen it in IMAX.

I did bite the bullet (and the extra four or five bucks) to see it in 3D. Once again, I listened to some joker or another tell me that this was a movie that needed to be seen in 3D. Once again, they're wrong. About once a year or so I fall for that. Totally my fault.

During Gravity, you get a strange sense of the claustrophobia of being in space. The nothingness closes in around you as much as it does the characters on the screen. That's something that the big screen does that your TV might not.

We're getting so close to entering an amazing age of CGI. Looking back at the time since the biggest and blockbusteriest pioneers, Jurassic Park and Terminator 2, movies have seen a lot of really, really shitty CGI. In many cases, though, filmmakers have done a great job in building on those blocks to create some great effects where they aren't necessarily obvious.

Gravity is one of those movies. While you're watching it, you start with a sense of logic that tells you that they obviously didn't film it in space, so there must be something going on. But the thing that sets it apart is that you very quickly forget. I wonder if it's because there are no monsters or even animals behaving is ways they wouldn't normally do so? Because you don't have to suspend that reality?

Other than that, it has a pretty straight forward plot, the acting is well enough, and we get character development. What more can you ask for?

Even though I wasn't expecting to like Gravity as much as I did, that's nothing compared to the absolute surprise I got from watching movie number two...
Created by His Excellency Kaboom32 at 10:43 PM