Come and Get Your Love 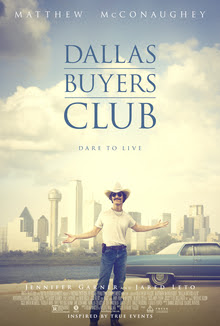 I think I'm experiencing déjà vu with this movie. It's nothing about the plot or setting or anything like that. It's Matthew McConaughey.

You see, he's really, really good in Dallas Buyers Club. I left the theater thinking to myself, "Matthew McConaughey? As in, 'All right, all right' with no shirt on playing the bongos? He's this good of an actor?"

And then I took a look at IMDB to see what else he had been in. My memory is that he's been crapping it up in a bunch of stinkers. But no, it's a list of pretty good movies. And pretty good performances.

And here's the déjà vu. I'm pretty sure I've had this same conversation with myself and gone to IMDB and reached the same conclusion.

I guess it isn't a particular movie that I'm thinking of but just the guy himself. Now there are probably other reasons as well. I didn't see Sahara, but I heard it was a turd and that he was probably a piece of corn in that turd. His role in The Wolf of Wall Street was memorable, but his acting was a bit over the top. And yeah, he was that guy who played the bongos and ran around without a shirt. Or so I heard. Or read. I don't know. For some reason, that's how I know him.

It's funny that I talk so much about McConaughey being good. Jared Leto was phenomenal and will get a best supporting actor nomination.

In addition to all that, it's a really good movie. When it's finished, you'll learn more about HIV and AIDS medications. All I knew before going in was "AZT. That's the AIDS drug, right?" Turns out - no. It's not. Or it shouldn't be. And oh yeah - you'll hate another part of our beloved government, specifically the part that is supposed to be keeping us safe from all of the horrible drugs that people are abusing themselves with. Because it's a black and white issue - no grey area whatsoever.

It's still in theaters. Go see it.
Created by His Excellency Kaboom32 at 8:37 PM