Tomorrow morning, I'm on my way. The car is packed with everything I won't need tonight. It should take me about 15 minutes to get ready in the morning, then I'm out of here.

The main idea of the trip is to get as far east as I can as quickly as I can. I'm going to hit a couple places in Texas that I haven't been to before, enjoy New Orleans once again, then Universal in Orlando. Next I'll head down to Miami for the week long cruise, my vacation from the vacation.

After that, I'll make my way up the east coast, returning to Orlando for that other theme park. Continuing north, I'll hit a bunch of locations that would have been great to see while I was still teaching the eighth grade curriculum. I'll hit a few Civil War sites, some new and some repeat spots.

I'll head back west in Pennsylvania, then take a detour up into Michigan to visit family and over Lake Michigan before starting the sprint back home on I-80. The whole thing is 41 or 42 days, depending on whether I stop the last night or barrel through. Streets and Trips has the mileage at just over 9,000 miles. I imagine that with detours and side trip that I'll go over 10,000, or at least get really close to it.I'll be in 23 states (though I probably won't actually step foot in neither Mississippi nor South Carolina), Washington, D.C., and four ports in the Caribbean. I'll get to four baseball parks, three new and one old favorite.

The biggest problem I'll face with the recent surgery is on the first day. I'm driving almost 850 miles in one shot. That was planned before my body tried to kill me. And really, it would be tough even if I were healthy. Sitting for long periods is still a test. And to put this as nicely as I can, my bladder requires more immediate attention than normal (though it's been much better the past week). I'm expecting to have to stop more than I normally would, and I'll certainly be ready to stop for the night. 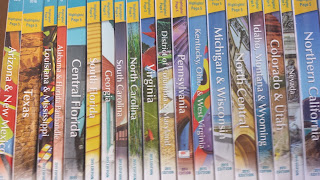 A few days later, I'll test my walking. I'm probably walking at about 80 percent speed right now, but not for long distances. For me right now, a long distance is my car to the back of Safeway. New Orleans is a walking city, so I'm a bit worried about that. A few days later I'll be at Universal Studios in Orlando. That's going to be a lot of walking, and it will also be roller coasters and rides. I have no idea what that will be like.

But other than all that, I'm excited for the trip. I'm going to a lot of really cool places, some new, some old. I hope to post something on here every few days, but not a daily update. Most importantly, I won't have WiFi access everywhere I go. Motel 6 is great and cheap, but they still charge for WiFi. I might play with the blogger app and text-to-speech to post a few things while I drive.

So I'll get some pictures up here, some descriptions and maybe stories, and some dash-cam video from any places that look cool. I hope you enjoy!
Created by His Excellency Kaboom32 at 10:53 PM

I'm looking forward to following your trip! Good luck with everything. Didn't know you were having surgery.

What's going on with your health? Hope you get better in time to enjoy your trip.