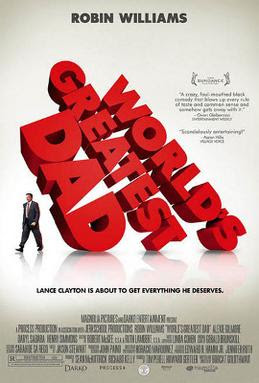 I don't want to say too much about World's Greatest Dad because you need to go into it without knowing what's going to happen. So I'll be vague.

The first thing that immediately popped into my head when first learning about this movie is the movie Fathers' Day. Clearly, this is because they both start Robin Williams and have a father in the title. I didn't see that movie, but it doesn't look very good.

This is not that movie.

This is probably my favorite Robin Williams role. He is different from anything else he has done before here. I would even say that if you don't like Williams, you'll still like this.

World's Greatest Dad was written and Directed by Bobcat Goldthwait. Many of you might only know him from the Police Academy movies. You only know him by his "Grover voice," as Goldthwait calls it. In that case, you don't know him. He isn't like that all the time. One of his standup shows is even called Is He Like That All the Time?

This is a dark, messed up movie. The only reason to skip World's Greatest Dad is if you don't like black comedy. If you do, check it out. Get ready for some Bruuuuuuuuuuuuuce! (Hornsby, not Springsteen)
Created by His Excellency Kaboom32 at 8:15 PM

If I say that these titles are driving me crazy, will you be more apt to tell me what the hell they are?
Oh, and Shakes the Clown for the win.

Nolan, I figured out what the titles mean. I suggest you try this link.

Hey, assfuck, I've googled and wikipedia'd every one of his titles, and I don't see a semblance of sense in them.

Until he tells me what they are, I'm chalking it up to him being a pretentious assfuck who fancies himself the Riddler, who was also an assfuck.

I Googled it and figured it out.

Swahili? Awesome. It was obviously a countdown but I had to google it to figure out the answer. Lame, I know.