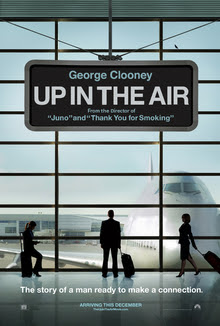 Up in the Air is the third movie from Jason Reitman. I just wrote about his first movie, Thank You for Smoking, in my best of the decade blog. I liked his second movie, Juno, quote a bit, though not as much. I've since discovered that it's mostly the pretentious soundtrack that turns me off.

I liked Up in the Air for a lot of the same reasons that I liked Thank You for Smoking. George Clooney's character, Ryan Bingham, is as real to me as Aaron Eckhart's Nick Naylor. He's a confident character in his profession. He knows exactly what he's doing every step of they way while he's working. But then when it comes to his personal life, that's a bit more of a disaster.

Ryan Bingham's has no real personal ties. He has family members who are more like acquaintances. Friends are mostly people he meets on the job, and therefore more like acquantances. They know who he is on the outside, but not much about who he really is. This is a theme that I found in common with those from Funny People. And perhaps I'm again drawn to it because it might be a bit personal.

The trailers for Up in the Air don't appeal to me. In reality, a lot of what they show is out of context. They present it as a light,quirky comedy. But it's more than that. It's more of a drama that's light on the outside but has a bit more of the darkness of real life. And by that I don't mean that it's a dark comedy. It has some real moments that I lot of people might find to be a bit uncomfortable, even though its best notes are quite subtle.

I've read a lot of what the critics have had to say, but I haven't heard from any "normal" folk who have seen it. I have a feeling that the average film goer might be a bit lukewarm after seeing it, mostly because it isn't just that light hearted comedy they're looking for. Near the end, Up in the Air takes a turn that is going to bother people. The movie isn't wrapped up in a neat package with a tight bow.

And in the end, can the average person really believe that some people actually like being alone? We do exist. And that's probably why I like this movie as much as I do. I'm actually looking forward to watching this again. i have a feeling that I'm going to like it even more the next time, and I might even like it as much or more than Thank You for Smoking.
Created by His Excellency Kaboom32 at 10:47 PM

I've heard nothing but good things about this film, even from "normal" people.

Now will you tell me what your titles mean?