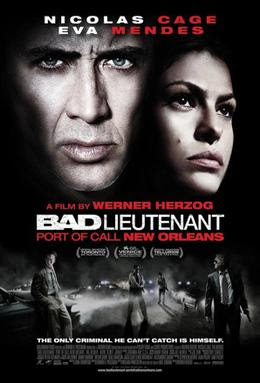 This movie is simply nuts. When I wrote about Taking Woodstock and Extract, I mentioned that movie makers all seem to show drug trips the same way. They all use wavy camera trick. I wanted a movie that showed something different. Bad Lieutenant shows it differently.

I haven't seen the original Bad Lieutenant with Harvey Keitel, but from what I understand this uses little more than the title.

I'm convinced that Nicolas Cage isn't a great actor. He's a good actor, but he's insane. The guy picks bizarre movies. He named his child Kal-El. While that's the most awesome thing ever, it's still nucking futs. He married Lisa Marie Presley, and she only marries complete nut jobs.

But when the role calls for someone to be absolutely insane, Cage nails it. My favorite role of his was in Adaptation, where he played twins. But the part was rather insane. In Bad Lieutenant, very few people could have played Lieutenant Terrence McDonagh. The actor had to be fearless - they couldn't be afraid to go over the top and then keep going further. Well, fearless or insane.

This is such a bizarre movie. And I mean that in the best possible way. You will have no idea where its going, and you might not even be sure where you've been. But in the end it still makes sense. Sort of. Enough, at least, to enjoy it. I was sad that I couldn't find room for it in my top 10, but it deserves honorable mention for the year 2009.
Created by His Excellency Kaboom32 at 10:05 PM