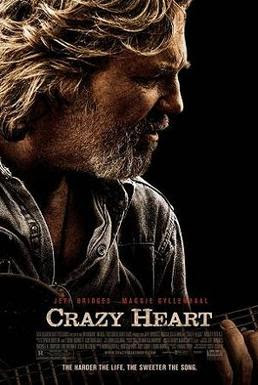 Crazy Heart is getting a lot of buzz because of Jeff Bridges in his performance as a washed up country star named Bad Blake. In the movies I've seen this year, I can't think of any lead actor roles that dominated a film as much as this, so I'll be surprised if he doesn't win.

When I wrote about Me and Orson Welles, I mentioned that a couple of the performances were great, but I had no other roles from them to compare. With Bridges, he was Flynn, the creator of Tron. He was the Starman. He was recently Obadiah Stane in Iron Man. Most importantly, he IS The Dude. Looking at his resume, he has been quite diverse, and he has been nominated many times. He should win this one.

So how's the movie? It's pretty good. It reminded me of The Wrestler in some ways, as Bad Blake is at a similar point in his career as Randy "The Ram" was in his. I'm not a country music fan by any stretch, but the music, all performed by Bridges, is fun. I felt like the movie lost a bit of steam near the end, but as an alcoholic, it needed to follow one of two paths with the character. it definitely wasn't enough to ruin it, though. I recommend checking it out once it finally arrives at a more convenient theater. 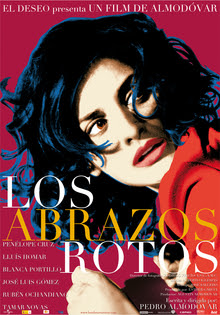 On the other hand here's a movie I'm not as wild about. I'm going to admit right up front the awful truth about Broken Embraces. I didn't get it.

It's not that I didn't understand the plot (or that I couldn't figure out that you had to read the subtitles in order to understand the foreign words they were saying).

The inner teenager inside me wants to go ahead and dismiss the whole movie. I didn't understand it, so I have to just say it's hella gay and hecka boring. There are many good reasons why I'm not a movie critic, and this movie just shows me one of them. I'm just missing the whole point.


SO - this ends my Movie-a-Day entries. I saw 45 movies in the theaters in 2009, and I had a blast hitting that mark. Over the past month, I wrote about 34 of them. For those who are not so mathematically inclined, that leaves 11. Tomorrow I'll start counting down. I have a number 11 choice that I liked too much to leave off, so I'm giving it a runner up award. I'll write about that and number 10 tomorrow. Just a reminder that these aren't the BEST movies of 2009- these were my favorites. The best would probably include Precious, The Hurt Locker, and the Fantastic Mr. Fox. But I liked these more.
Created by His Excellency Kaboom32 at 7:45 PM