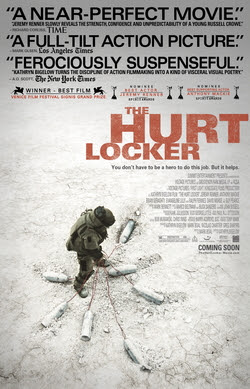 At the beginning of the month, I went down the list of movies to give myself time to think about each one. When I saw The Hurt Locker on the list, my immediate thought was, "It was good. I liked it quite a bit, so I won't have any problem writing about it." That was about it.

I remember after seeing it that I had a few problems with it (I'll mention one a bit later), but overall it was very good. I figured that it would make my top 10 list. Yet when I started actually making the list last month, I didn't really consider it. I looked at it and thought, "It was good, but there are 10 more that I liked better." So I didn't think much more about it at that time.

Last night after writing my Movie-a-Day entry, I looked at the list to see which movie is next. I saw The Hurt Locker. My first thought was that "It was good. I shouldn't have a problem writing a few things about it." I didn't think too much more about it.

During the day, I started thinking about what to write. I drew a blank. I don't remember enough details about the movie. I immediately thought about what I wrote about Terminator: Salvation. I stated that it's biggest sin was that it was forgettable. So I guess The Hurt Locker was the same way.

The one thing I do really remember about this movie was the shaky cam shots (. I don't like the shaky cam. I don't want to be part of the action. I want to follow the action. I remember it being enough of a distraction to take me out of the movie for a bit (I'll talk more about shaky cam in a later movie where it really bugged me). Yet last year there was another movie that had too much shaky cam. it had chase scenes that were hard to follow. Yet I named that movie, Slumdog Millionaire, my top movie of the year.

So I what I really started thinking about is how inconsistent people, me especially, can be while watching a movie. The word I was really thinking about what hypocrisy, though I don't want to go that far. It's too difficult to predict which movies one will like and dislike. Shoot - Roger Ebert liked Garfield.

I guess that's one of those things that makes art so great. It really appeals to something inside instead of being strictly cerebral. My brain is telling me that The Hurt Locker was a good movie. I remember that a lot of the scenes were very tense. Obviously, things are going to be so when one is disarming a bomb in the middle of a war zone.

But on the inside, The Hurt Locker didn't resonate with me. It didn't stick. And without watching it again, I just can't explain why. Movies are such an amazing form of art.
Created by His Excellency Kaboom32 at 8:31 PM

This is kind of how I feel about Terminator: Salvation and a few other films, only the exact opposite. I realize while I'm watching it that it's not that great of a film. I see its problems. Yet somehow, I still find myself liking it. Go figure.

You might want to take another look at this entry. Parenthesis and italics problems abound.