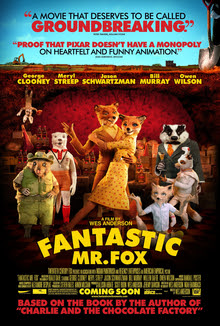 I guess I have a bit of a history with the book The Fantastic Mr. Fox. I distinctly remember giving an oral book report on it in the fourth grade. I had to read a "humorous incident" from the book, so I read the part where Mr. Fox got his tail shot off. Since I remember doing the book report, most likely I never read the book.

While watching the movie, I didn't even remember any of that until that scene came up in the movie. It was a flashback of - just giving the book report itself, not anything from the book. But still, I had read other Roald Dahl books, including Charlie and the Chocolate Factory and its sequel Charlie and the Great Glass Elevator. I liked these books quite a bit and with each enjoyed multiple readings.

The movie The Fantastic Mr. Fox looks great. Ultimately, it's one of those movies where I think I might like looking at it more than I liked what was really happening.

But there's plenty more to like. I liked all of the voice work. I feel like the actors would have sounded close to the same if they had been in a live action Wes Anderson movie.

Of Anderson's movies, I like Rushmore and The Royal Tenenbaums. I watched Bottle Rocket not too long ago, but I had trouble getting into it. Same with The Life Aquatic.

The thing with his movies is they can be a bit too self aware. Or maybe to self indulgent. With Rushmore and The Royal Tenenbaums, it works. The other two, not as much for me.

With The Fantastic Mr. Fox, Anderson had to reign that in a bit to make it a more children friendly movie. There are still bits of it, but not as much. It's there in the confidence of the character of Mr. Fox, but it needs to be.

The movie is a bit slow at times. I felt as if there were times where they just wanted to play with the stop motion instead of just allowing the story to move along.

I also wonder how well kids would really like it. I think they'll like the visuals. But I don't see it as the type of movie that kids would love and want to see again and again.

But as an adult? I liked it quite a bit. I kinda wish they had taken on Charlie and the Chocolate Factory in this way.
Created by His Excellency Kaboom32 at 9:05 PM