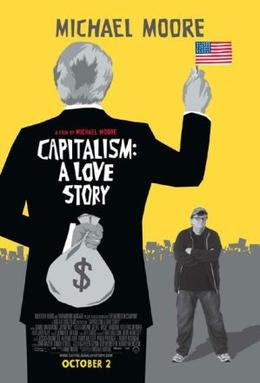 Will you like Capitalism: A Love Story? Here's a really simple questionaire for you:

Question 1: Did you enjoy any of Michael Moore's previous films? Yes or No?

If Yes, then yes.

Yeah, it's pretty straightforward. It's another Michael Moore movie. Personally, I like his movies a lot more than I like him. I think he creates a very entertaining style of documentary. There is never a slow or dull moment. He knows how to bring you into the story. He does a good job of mixing personal stories with discussions of details with his stunts. Basically, it's easy to sit through a Michael Moore movie.

Also, he always leaves you something to think about. Even with capitalism as a cornerstone of our society (I know this because I heard Glenn Beck tell me so on his radio show today*), I still left questioning that concept. And of course he timed the movie perfectly. Those fat cat bankers and corporations are the biggest villains around. Ultimately, I needed to redefine my viewpoint of capitalism.

And that, I think, is the most positive aspect of Michael Moore's movies. He does get people thinking about his ideas. Bowling For Columbine was his best work with this goal in mind. He didn't really try to give any answers, but instead he wanted to explore the questions further.

Now, that's not what he really wants in this movie. I believe that Moore's goal isn't to get people thinking about these things anymore. I don't even know if he wants change. He wants the other side to look bad. With Sicko, he at least pointed us toward his alternate viewpoint. In Capitalism: A Love Story, he seems to want to bring down the top without offering a real alternative.

That said, I still recommend it to anyone who can still handle Michael Moore. There are a lot of questions and ideas that he brings up. He exposes a few things that were very revealing, such as the corporations purchasing life insurance policies on its employees (not for the employee - so that the corporations can collect).

Also, I don't think that Moore is as irrelevant as people think he is. He is dismissed very easily by too many people. I heard that a lot after Sicko came out. A couple years later, in the middle of the health care debate, people were popping out from everywhere stating that Sicko was actually quite accurate and that (surprise) the health care companies spent a lot of time and money discrediting it. 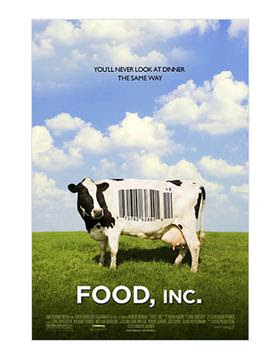 This was the only documentary I saw in the theaters this year. However if you're looking for a fairly new documentary to watch, I'll actually recommend Food, Inc. I watched it a few weeks ago thanks to Netflix, and it's also a movie worth discussing.

Food, Inc. is a pretty revealing look at the food we eat. Some other movies try to get you to think about your food by showing the cruel treatment of animals, show the slaughter of animals, or show the horrible conditions in which food is handled. None of that ever really got to me.

This one goes around that and shows quite a few surprising things that will make you look at your food and food companies in a different way. It has a few comments about large corporations that will actually go nicely with Capitalism: A Love Story. It's also very watchable, especially by documentary standards. Take a look.


*Disclaimer: No, I do not listen to Glenn Beck with any regularity. Today was the first time I have ever heard his radio show. Here's my quick review of the five minutes I heard today. It should be renamed Glenn Beck's Retarded Straw Man Program. End of review.
Created by His Excellency Kaboom32 at 8:31 PM