The Reader and The Boy in the Striped Pajamas

Why not start off the month with two movies? I wrote about The Reader briefly earlier this year. It was nominated for a Best Picture Oscar. I try to see all five nominated movies (though it's changing to 10 this year, so I need to revise my goal, so I watched it for that reason alone.

In my original writeup, I was nitpicky with the storytelling. I didn't like the nonlinear method of storytelling. I stated that I didn't think it was worth a Best Picture nom, even if it was pretty good. But since seeing it almost a year ago, my overall viewpoint has changed.

And this is one of the reasons why I wanted to celebrate movies this month. The best movies aren't just about the experience of watching them but what they make you think about. My memory of the movie is of an excellent Holocaust movie with a unique point of view. Since I am recommending The Reader, I'm going to do away with explaining that point of view to avoid spoilers.

While there is room for more Holocaust movies, I guess Schindler's List declared that you can't make another straight-forward movie; it showed the horror of the camps so completely. On two of the Europe tours I went on, we went to concentration camps - Auschwitz and Dachau. I can honestly say that I don't need to go to another ever again, or even back to either of those. I think that every person (even Ahmajinedad) should go to them, bu I've done it. These aren't like Civil War battlfields. I've been to a few of those, I hope to return to all of those, and I want to visit more. No, this is a part of history that you only need to see once. And I think Schindler's List does something similar.

Other Holocaust movies need new angles. The Pianist, from 2002, showed a man hiding from the camps. Band of Brothers dealt with the soldiers finding the camps. I even think there could be room for a new Anne Frank movie (with kickass CGI attic action!) And the other movie I want to talk about, The Boy in the Striped Pajamas, takes a look at a German family living next to a concentration camp. 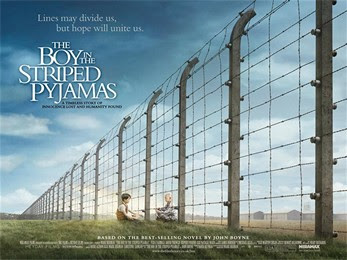 I didn't see The Boy in the Striped Pajamas in the theaters, so it isn't elible to be counted in my list, though I don't think it would have made it either. I don't think it's a spoiler to briefly summarize the plot here, since we're meant to understand that things sooner than the boy. A young German boy, Bruno, moves with his parents to a new home that's next to a "farm." His father, played by werewolf David Thewlis, is in charge of the farm, which Bruno slowly starts to realize that it's a camp for people. While the ending is possibly emotional overkill, I recommend watching this. It's streaming on Netflix right now.

I actually came close to showing this movie in class at the end of last year. I didn't for two reasons. The most important is that I taught the history of Rock instead of 20th century. But also because of the ending. It might have been too much for the end of the school year.

Of these two movies, The Reader is actually more uplifting that The Boy in the Striped Pajamas. The Boy could potentially mess with a kid's head. But of the two, it's the only one I could show in a classroom. Why? Boobies.

Did you see The Reader and/or The Boy in the Striped Pajamas? What did you think?
Created by His Excellency Kaboom32 at 9:04 PM

I saw "Boy." I do a pretty thorough Holocaust unit with my juniors where I show "Schindler's," "Life is Beautiful," and "The Last Days" (documentary) as different genres of Holocaust tales. Thus, I'm always looking for more Holocaust films to integrate.

My thoughts (and those of some of my students who saw it also) were that it would be better to show to junior high students. The ending is pretty intense, but it's also incredibly manipulative. It doesn't really go into the realities of the camps (the inmates seem to have tons of freedom), but it does show the banality of evil. In the end, it's too much like "Life," and I think that one's better.

I'm going to totally agree, with one exception that you explain. I give it a B- or perhaps a B, but that's because I was looking at it though the eyes of someone considering showing it to middle school kids. Most of them are still at the point where they need their emotions to be manipulated to get the point.