Terminator: Salvation committed a sin for which I cannot excuse. It was FORGETTABLE. Looking back, I can barely remember the movie. I remember a CGI Arnold, some huge robot, and a little kid who wouldn't stop talking. See? Perfect memory.

But beyond that? It's very, very fuzzy. Terminator 3 wasn't exactly the best movie, but I remember that chase scene as being pretty entertaining and over the top (in a good way). 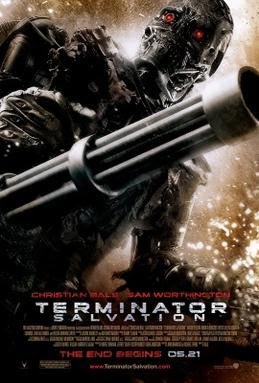 But really, were expectations much higher than that? It was directed by McG. This guy is known for his amazing... Charlie's Angels films. Yeah. high credentials. It does have Christian Bale, who lended it some credibility. The footage shown at Comic-con was well received. But beyond that, I guess I couldn't have been expecting much more.

Since I can't remember enough about this movie, I'm going to leave with two copy/pastes. First is James Cameron's response to the movie.

"It didn’t quite have the emotional power that it should have had. I thought Sam was great, very powerful, and Christian… people have criticised him for being one-note but that’s part of the character. He was playing a guy who’s furiously dedicated to the survival of the human species. Maybe more could have been done with that. In T2 we showed the consequences. It drove Sarah insane."

He hits it on the head with those first seven words, though he tries to be politically nice.

So here's what I wrote right after seeing it. I guess I agree with most, but if anything, I thought less of the movie as time went on. I went from "not too bad" to "not really worth much."

>Terminator: Salvation was OK. Not too bad, but nothing great. The action was pretty good. Seeing a bunch of Terminators walking around was kinda cool. The movie had a cool look to it. The dialogue was kinda crappy throughout. The only interesting character was only half human. There were a few things that were way out of place. For example, every human that wasn't part of the Resistance was a country bumpkin stereotype right out of Deliverance 2018 ("Squeal like a cyber-piggy"). With those negatives, I think the positives were able to outweigh it a bit.

But before you consider this to be much of a recommendation, I had really low expectations going in. I hope those of you who see it in the theater have someone in your theater who is an awesome as the person who was sitting behind us. There's a VERY forced "I'll Be Back" from John Connor. And immediately after that line, the fucktard behind us decided that he had to repeat the line in an awful Arnold accent. Heading out of the theater, I said that it was my favorite part of the movie. Looking back, I still agree. It was the most memorable moments.

And then there was Christian Bale. Christian Bale was rather... crappy. He hit one note throughout the movie, and that note was "Angry Because I Have To Take a Dump." It's been awhile since I watched T2 or T3, but he didn't seem like an adult version of the John Connor from those movies. The disappointing thing is that the only credibility that this movie has was Bale. It certainly wasn't hack director (Charlie's Angels) McG. After relistening to the rant, it wa during a scene with Bryce Dallas Howard (and I believe that her only part in the script was to open her eyes really big). Since all of his scenes had the same out of place intensity, I have no idea what the scene was. But since the movie looked better than Bale's acting, I declare the following. One point: Shane Hurlbut. One douche: Christian Bale.
Created by His Excellency Kaboom32 at 1:38 PM

I bought the Blu-Ray and watched it again. It's a failure, but I think that it's an interesting failure. I can't really defend it, but there's something that I like about it. I can't quite figure out what that is.

Perhaps I'll write about it this month as well.