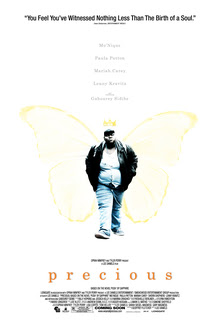 If my year end top 10 were a "best of" list instead of my 10 favorites, Precious would be on the list, and probably pretty close to the top. I'll be surprised if it isn't nominated for the Best Picture Oscar.

With my favorite movies, there is usually some kind of emotional attachment to the movie. That's something I didn't particularly have with Precious. There wasn't something I that pulled at me. But I think that only adds to how good of a movie this is. I still liked it quite a bit even without that.

The performances are great all around. I've read a lot of buzz for an Oscar nod for Mo'Nique. It's definitely a great performance, but I don't really know who she is outside of this movie. By that I mean I haven't seen her in anything else that I know of, nor have I seen her on any talk shows.

I have, however, seen Gabourey Sidibe, who plays Precious, in an interview. She's a completely different person than Precious. It showed me how great her work was in the movie. I don't think I would have recognized Mariah Carey if I didn't already know she was in this movie. The acting is really great all around.

Precious shows a world that I'm not really used to. Chances are most of you aren't either. But it's a real world that everyone needs to be aware of. I don't think it would be such a bad idea if more people saw this movie and became more aware.
Created by His Excellency Kaboom32 at 5:11 PM