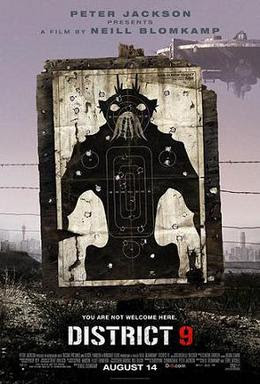 District 9 was a fresh new look at the alien invasion genre. The general idea is probably the most "realistic" view of what it would look like if aliens were to come to Earth.

Many invasion movies show our alien overlords (whom I, for one, would welcome) to have superior technology and/or advanced morals. In this movie, they don't. Yeah, there are many technologically advanced weapons. But the difference is that they don't immediately overwhelm the world with them. Instead, the aliens are put in their own ghetto.

Another reason I liked the movie is that the movie isn't about their invasion. In fact, what their arrival and placement into the camps is all done before the movie really starts. I was reminded of Kurt Busiek's Astro City. In the alien invasion story, the actual invasion was the background story. I seem to remember the actual info about it being in about two panels, mostly words. This was the same way. We're talking about Wikus and his point of view.

It's my understanding that the special effects in this movie were done for a much smaller pricetag tat many Hollywood movies. I couldn't really tell the difference. And since the effort went into storytelling, it didn't matter.

Also, the ad campaign was fun. the "humans only" signs found all over theaters in the months prior to its release were interesting. The first time I saw them, I stopped to read it. After seeing several, I even went online to see what it was about. Such a simple idea got this small movie into minds long before it was released, which allowed for word of mouth to get around early. That sort of thing is usually reserved for larger movies.

Wikus's story might remind some of The Fly. And they would be correct. For me, it brought back sweet, sentimental memories of Robot Ninja. Though,minor spoiler, at the end Wikus does actually kick a little ass. But it is just a little. Wikus really is a Robot Ninja for the 2000s.
Created by His Excellency Kaboom32 at 1:03 PM