The fifth movie I saw this year was Star Trek. Both because I don't feel I have too much original to say about it and I need to get out of here, this will just be a quick writeup.

I've always been a Star Wars fan instead of Star Trek. I've seen some of the movies. I've seen a few episodes of the original, but not in since I was young. I do show a clip in class, though. But I only know about this clip because of a youtube search for the Schoolhouse Rock preamble.

For The Next Generation, I never saw a complete episode until I couple years back. I added it to my Netflix queue, since I enjoy watching full seasons of shows at a time. I made it through the first disk, maybe into the second before sending it back. I just wasn't into it enough.

In college, I started watching Voyager (interestingly to me, I started watching with my friend George - a guy who I haven't thought of in years, but makes his appearance in my blog for the second day in a row.) I think we made it through most of the first season, meeting to watch it every time it was on. But I don't remember us watching beyond that. 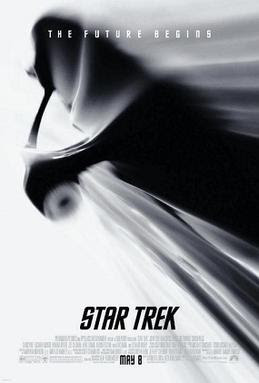 I haven't seen any of the other series. That said, I'm not a big Star Trek fan. So a reboot wasn't a problem for me. And I really enjoyed the movie. The plot involves time travel, and when you drive down that road, you're always going to hit plot hole. And it's science fiction in which the science is the fiction, so some part there don't make sense.

But what Star Trek did was to redefine the characters of Kirk and Spock. I don't know if individually it made them into the most interesting characters, but it didn't have to. It made them into another great on screen couple. I think that dynamic was what made the movie work for me.

I don't remember being bored while watching it, and it looks great. There weren't too many part, from what I remember, where they went for big CGI shots while sacrificing pacing. I enjoyed it quite a bit, and I look forward to some more Abrams
Star Trek.
Created by His Excellency Kaboom32 at 10:48 AM