Me and Orson Welles 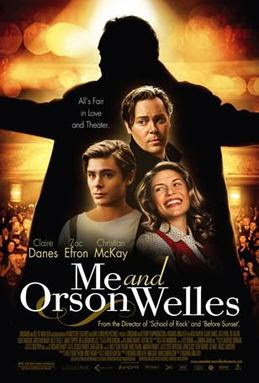 Me and Orson Welles was a bit of a surprise for me. It's not the type of movie that I would ever really see, but I've been to many movies out of my "comfort zone" this year. It got some pretty good reviews, so I went for it.

My main reservation was Zac Efron. Since I'm not well versed in the High School Musical movies, I'd never heard of him. But he looks like a tool. He wasn't too bad in this movie. He has moments when he looks like he's out of his element, but his character was supposed to be that way. So he was probably a good choice for the role. We'll have to see in later roles how good he is.

The strongest performance, and the reason to see this, is Christian McKay as Orson Welles. Welles is portrayed as a prick. From what I understand about him, it's an accurate portrayal. The scenes with McKay are the strongest and best in the movie. Since he hasn't really been in anything else, is he a good actor, or just a good Orson Welles? Again, we'll have to see in later roles how good he is.

If you don't see Me and Orson Welles, you won't miss anything too groundbreaking. And right now, there are probably a few other movies more interesting to see. If it were a slower time of year for movies, this would be a recommendation to go see it. I think it will surely be worth a rental for Christian McKay's Welles. And if you've seen a few other movies this season and want something different, check it out.
Created by His Excellency Kaboom32 at 9:01 PM