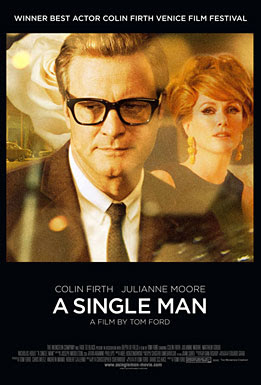 I don't feel like I have a lot to say about A Single Man. Is it good? Yes, I guess.

It's a "theater" movie for me. This means that if I had waited to watch it on DVD, I might not have finished it. It has a slow, deliberate pace. It's not that this is a bad thing. I like stories that take their time to develop character.

Also, many movies are quite rewarding if you can make it though them. For example, Gone With the Wind is excruciatingly long. It's a great movie, but it's a movie that I prefer to have seen than to see. Back in 2006, I put the Woody Allen movie Match Play at number 8 in my top 10. If I had been watching at home, I surely would have stopped. But since I was in the theater, I got to the last act, where everything finally pays off.

A Single Man is a movie that deals with depression, broken hearts, and suicide. It isn't an easy movie to watch because of these things. Colin Firth is very good. But overall, it just didn't speak to me.
Created by His Excellency Kaboom32 at 9:48 PM

Yes, yes. Match Point. I got it confused with my new arson hobby.