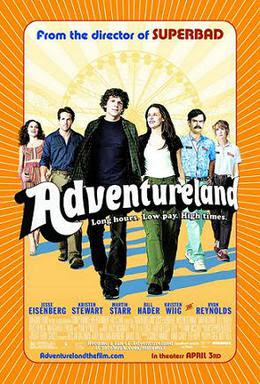 My plan while writing about Adventureland was to discuss movie expectations and how they shape your movie going experience. Then I read Nolan's blog where he discusses expectations for the second day in a row and decided to change where I was going. but then I realized that it would change my expectations of my blog writing experience. Also, it's a common theme in many of my writeups, so I will continue as I had this planned in my head.

The trailers and commercials I saw for Adventureland had it pegged as a bit of a screwball type comedy. I didn't find the trailers to be especially funny, but there were some people in it that I often find funny, such as Kristin Wiig and Bill Hader from SNL. The trailers also showed that guy who kinda looks like Michael Cera (Jesse Eisenberg) and the Twilight chick (Kristen Stewart). I didn't have a lot of interest in seeing it.

One weekend, I was in the mood to see a movie, but I didn't really know what to see. Rotten Tomatoes was showing Adventureland as having a pretty high rating. Remembering what However, I didn't really read the reviews. I put two and two together - the trailers and the ratings - and figured that this could be a funny comedy. That sounded like a decent was to spend the afternoon. My math was off, but in a different, weird way.

Back in college, my friend George and I talked about gong to see a bunch of summer movies as a way of getting through midterms and finals. But he never wanted to see any trailers or commercials. One of the movies coming out that summer was Twister, and I specifically remember him running out of the room when the trailer came on TV. He wanted to see his movies fresh. While I cannot recommend Twister in any way shape or form, it does have one of the funniest lines ever, but not intentionally. (If you see it again, it's Bill Paxton's amazing delivery of the line, "He's in it for the money, not the science.")

I think I remember reading (though I could be off, yet I'm feeling too lazy to look it up) that Gene Siskel would wait in the lobby until the trailers were over. He wouldn't read any notes before the movie about the movie and tried to avoid knowing anything about the movie beforehand. In his review of Monster, Roger Ebert writes that he had no idea that Aileen Wuornos was played by Charlize Theron until the closing credits.

The closest experience to this that I can remember right now is when I first saw Groundhog Day. I went to see it with a group of people, so I was just along for the ride. The few commercials I had seen didn't discuss its actual premise. All I really remember was seeing Bill Murray drive around with a groundhog and Murray's line, "I'm a god. I'm not the God..." Clearly, if you've seen the movie, I had no idea of the premise. This means I had the experience to share Phil's (Murray's character) realization of the plot. While it's already a great movie, it made my movie going experience that much better.

So back to Adventureland. I was expecting and wanted a silly comedy. It isn't, and I didn't get it. I spent the first half of the movie slumping in my seat feeling really disappointed that I wasn't laughing. I was getting upset with the reviewers for giving this comedy such a high rating.

I blame all of that on my expectations. The fact that Adventureland isn't in my top ten is probably due to dumbasses who put together the trailer, and my dumb ass for not learning a bit more about the movie before going in.

But luckily, I started recognizing that the rest of the movie is actually pretty good. Not as a silly comedy, but as a good romantic comedy. And as a coming of age comedy. The characters are nicely developed. The dialogue is sharp. Wiig and Heder provide some good comic relief to ease so that the movie doesn't have just one tone.

So here's the story: I was caught of guard about Adventureland so that you don't have to. This movie deserved a wider audience because it's actually pretty good. It's my second favorite romantic comedy of the year, but I'll get to that on my top 10 list (unless it's bumped in the next few weeks).
Created by His Excellency Kaboom32 at 6:38 PM

It's more of a coming-of-age drama with a lot of comedic moments.

I like Twister semi-unironically. I liked Adventureland. I really like how I stole your idea and forced you to admit it.