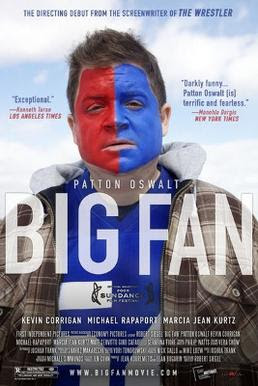 Here's another movie that not many of you saw, and perhaps many didn't even hear about. I had to seek out a viewing in San Francisco

Big Fan stars Patton Oswalt as a, well, big fan of the New York Football Giants named Paul Aufiero. Paul calls into a sports talk radio show regularly with prepared scripts delivering smack talk, especially to Philadelphia Eagles fans. He then gets to meet one of his favorite players with disastrous results.

I listed to talk radio every now and again. My favorite show is Len "I'm a Law-yah" Tillem on KGO. People call into that show for legal advice. As Len himself states, the reason to listen is for the stories. For sports radio, I tune into Jim Rome every now and again, though you don't learn a lot about sports. It's pretty much just smack talk.

I've listened a lot, but have never really had a desire to call in. There was one show that I did call. It was a Saturday morning trivia show. They asked a question to which the answer was Plessie V. Ferguson, something that I teach. About 15 minutes went by without anyone calling to answer. They kept asking, so I finally called and answered it. They asked me a few more related questions,and I was able to answer them (pretty sure the follow up answer was Brown V. Board of Education Topeka , KS). I was promised a prize. The next week was the last time the show was on the air. I never got anything.

So what type of person does call in? Is it really the casual person just listening and having such an important opinion on the topic? I think rarely. I think that most of the callers are regulars. Big Fan presents Paul as a guy whose life revolves around the Giants and calling into this radio show. Other than that, he doesn't have a whole lot going for him.

Patton Oswalt is great in this role. You might only know him as a character on King of Queens. You might know his voice asn Remy in Ratatouille. If you haven't listened to his stand up, check out Feelin Kinda Patton. My favorite bit is his Black Angus commercial, but it's pretty funny from beginning to end.

This is a pretty good little movie. I really like these independent movies that comedians make to tell a simple story and show off some acting chops. There's no need for a $100 million budget. There's just a good story, good characters, and good acting.

I can recommend a couple more movies along the same line. First, I Want Someone To Eat Cheese With (despite the grammatically incorrect title) starring Jeff Garlin from Curb Your Enthusiasm. Second, The Hammer starring Adam Carolla. If you know him just as the guy from The Man Show, you;ll be surprised. All three movies are pretty good. I'd consider that a nice little film festival.
Created by His Excellency Kaboom32 at 4:33 PM

I liked The Hammer quite a bit as well.

The Hammer is a much better boxing movie than Million Dollar Baby.