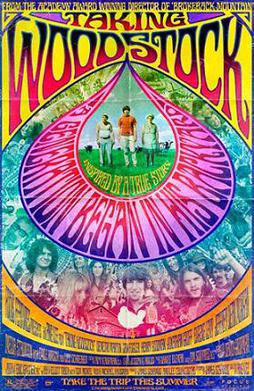 I think my writeup of Taking Woodstock is going to be pretty simple and pretty straightforward, since that's what the movie was. Though there was one thing that wasn't as straightforward about the movie, and that gave it a bit of a unique twist.

Taking Woodstock tells the story of a young man who tries to save his parents small inn by allowing a music festival to play. That festival turns out to be Woodstock, one of the biggest ever.

Of course, the music makes this movie. It has a pretty nice soundtrack, though the actual music festival is barely part of the movie. Director Ang Lee instead focuses on Elliot, played by Dimitri Martin. Is Martin a full fledged movie star? Not in the most traditional sense. He works nicely on Daily Show appearances, his Comedy Central show Important Things with Dimitri Martin, and his stand-up. No, he isn't going to be the lead in a romantic comedy or an action film. But for a movie with small goals like this one, he does just fine.

If you remember Ang Lee's mediocre Hulk movie, you might remember the way he split up the screen to look like comic book panels. Lee uses the same technique here simply to show different things happening at once, more like an episode of 24. It works nicely because a good song needs to have the accompanying action well choreographed.

One part of the movie did pull me out and got my mind off track. It seems like every movie that features a drug trip does the same simple camera tricks. So if you drop acid, is it pretty much just a camera trick? And if so, why would I ever need to do so? I can save myself some time and brain cells by looking through a camera and tweaking the lens. I want a movie maker to come up with something original.

Overall, it's a fun movie. There isn't anything too serious or groundbreaking, but if you're interested in Woodstock and want to see the story told from a point of view away from the stage, definitely watch it. If you just want a cool little movie, watch it.
Created by His Excellency Kaboom32 at 9:01 PM

I saw this movie here in Woodstock with Ang Lee, James Shamus and Michael Lang in the audience. It’s a small movie from the perspective of Elliot Tiber, a minor player in the overall saga of Woodstock but definitely worth seeing.

Go to http://www.woodstockuniverse.com for details.