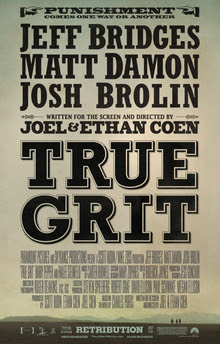 Last year, the Coen Brothers' A Serious Man was my favorite movie. Their movie this year, True Grit, was also great.

After seeing the trailer, I thought it looked cool, but the actors seemed to be playing caricatures instead of characters. It doesn't do their work justice.This cast might be a bit too small to call it an ensemble, but they worked so well together. I saw this just a few days after Tron, and Jeff Bridges is a completely different person. Matt Damon is different from any other character he has ever played. Hailee Steinfeld was great at Mattie, the girl who is leading the hunt. I was most concerned with her from the trailer, but she ends up stealing the movie from the other actors.

You can't help but love the way True Grit looks. The locations are beautiful all the way through. I think that one of the difficulties with going back and watching Westerns is that their locations are pretty generic. I wouldn't be surprised if most of the Hollywood were filmed in the Mojave Desert. Or more likely, the same Hollywood backlot designed to look like the Mojave Desert. I wonder exactly where the Spaghetti Westerns were filmed. I don't remember seeing any deserts in Italy, and a Google search for "Italian Desert" only shows me Italian Desserts. Mmmm... gelato.
Created by His Excellency Kaboom32 at 8:40 PM