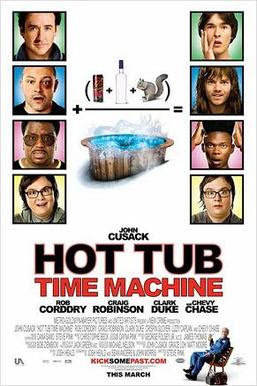 On one hand, I have a feeling that I'm adding Hot Tub Time Machine to the top ten list because it was a week year for comedies. Dinner with Schmucks, The Other Guys, and Get Him to the Greek were OK, but not memorable. The only other comedy released that I had any interest in was Due Date, but word of mouth wasn't good enough for me to try it out. So it's possible that I found a funny void in my top ten and threw this movie in there.

On the other hand it IS a damn funny movie. At the very least, it's a great parody of a lot of crappy comedies from the eighties. At best it's a great raunch comedy. Rob Corddry delivers some of the best lines. "It's like Gary Coleman's fucking forearm!" It has great rewatchability, but not if it's replayed on Comedy Central. They'll cut it to shred.

And then there's the title. It's in the same "So horrible it's great" category with Snakes on a Plane. The difference is that Hot Tub Time Machine actually has a good movie to go along with its title.

One last thing. How can you not enjoy a movie that seeks to create a better past by ending the legend of John Elway? Unless you're a Donkeys fan, of course.
Created by His Excellency Kaboom32 at 8:05 PM

I loved this movie too, and I hate that I have to convince everyone that I'm not an idiot when I bring it up. The title and the trailers really did it wrong. My favorite Corddry line? "Shia LeBouf!"