Number Nine: How to Train Your Dragon 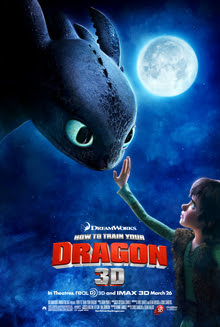 How to Train Your Dragon wins the award for worst marketing of the year. We're living in a time when a lot of animated movies are coming out, and a good handful of them are actually pretty good. If it's Pixar, you know to see it. But how do you drudge through the rest of them? On some ways, you can say the same thing about all movies. But some animated movie makers have finally figured out that animated movies can be good, while others still know that it doesn't have to be good - kids will still want to see it.

The same was true of another really good animated movie from a couple years ago,Kung Fu Panda. If I hadn't happened to have seen some good reviews of that, I never would have seen it. With Dragon, I only looked at reviews because of At the Movies. While people are saying that type of show is needless in modern times because of Rotten Tomatoes and other internet sources, I disagree. It's a shame that it's gone. And not because I agreed with the hosts. In fact, I found myself disagreeing with AO Scott and Michael Phillips quite a bit. But at least it was a weekly roundup of ideas instead of just seeing a number on Rotten Tomatoes.

The trailer made it look generic, but How to Train Your Dragon is much better than that. It ended up having a pretty good main character who goes through a good story arc. It has some great scenes, and the animation is beautiful. Then again, perhaps I will still in a Scandinavia hangover when I saw it and was really into the Viking stuff. Doesn't matter. It was cool.
Created by His Excellency Kaboom32 at 9:18 PM