Comic book are awesome. But much like music, I can't use one single day for all comic books. One of the worst kept secrets is that not all comic books are superhero books. A slightly better kept secret is that a lot of comic books, including many superhero books, are extremely well written. If you're keen to both of those secrets but don't know where to start, I'll have a few suggestions for you over these 101 days. 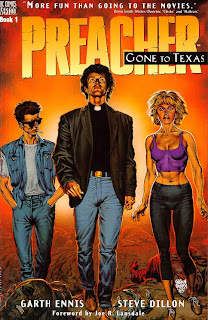 Preacher is one of my absolute favorites. If you're sensitive about things often reserved for R rate films and/or blasphemy, you might want to skip it. Personally, I enjoy some good blasphemy every now and then.

Short version of the story is that God quits. The basic power of God moves along to preacher Jesse Custer. Joining his is his girlfriend, a vampire, Arseface, and the strangest damn characters you've ever come across.  This isn't an ongoing comic, so you can read the complete story.

Every once in a while, somebody new picks up the rights to the movie or TV show. This is a comic book series that I don't think I need to see. In the picture to the left, you'll notice the quote at the top of the trade paperback, "More fun than gong to the movies." I see lots of movies. I agree. Preacher is more fun. There's no way that the fun and shock can translate to a moving picture. They can try, but it just won't be right. With many of the superhero movies, there are so many stories to tell. But this one was told right the first time.

Check it out, people!
Created by His Excellency Kaboom32 at 9:31 PM