Today's entry wasn't supposed to be until a later date, but it became appropriate today as it was reported that Chinua Achebe died yesterday. He wrote one of my favorite books from college, Things Fall Apart. 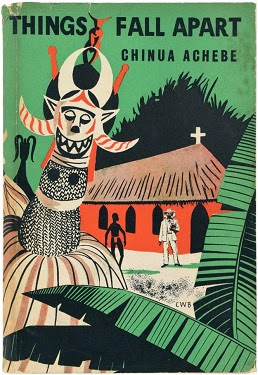 Things Fall Apart is the story of a man from an African village. Basically, things fall apart from him and he loses his decent life. Almost everything that happens has roots in the British colonists, and they are pretty much to blame for everything.

I had to read it in two different classes. The first was a world history class, and the second was an African history class.I remember the professor in the second class yelling at all of us. No one had caught some little reference to something that happened twice in the book, once at the beginning and once near the end. He spend at least twenty minutes berate us for being undergrads and only reading the book once instead of several times before class.

In spite of that, I learned to like the book quite a bit. I brought a copy to school with me this year to pull out some excerpts to use when I taught imperialism, but I didn't finish getting that ready for this year. Next year.

Created by His Excellency Kaboom32 at 8:30 PM

I teach it, so I know it pretty well. Let me know if you need any help.

Cool. I haven't read it in about 15 years, so I'll have trouble finding exactly what I want. I guess I could also read it again, but reading is for suckers.