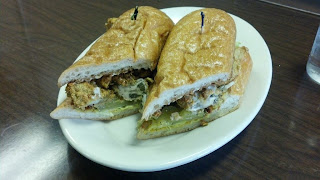 It seems like I've been posting every other day about food, so I wanted to throw in a nod to one of my favorite places to get food - New Orleans. This evening I headed over to Nola Po'Boy and Gumbo Kitchen in Concord to have a tasty o'Boy. I had a this fried oyster po' boy.


They're pretty good, but it's not the same as when you're in New Orleans. And in New Orleans, I always stop at least once, though probably twice, at Mother's Restaurant to get the BEST and most awesome po' boy on the planet - the Ferdi Special. 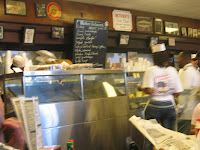 The awesomeness of the po 'boy is in the way the stuff on the bread sticks together. The mayo and mustard keep the soft french bread stuck to the lettuce and pickles, which stick to the meat. And every flavor compliments the others.

But the Ferdi. It has that special ingredient that brings it all together. Debris and gravy. The little bits that fall off the beef as it roasts. They pour that right over the ham and roast beef after making the sandwich. It's not so much that it falls apart. It's enough to make it all stick together and taste perfectly awesome.

Created by His Excellency Kaboom32 at 9:42 PM