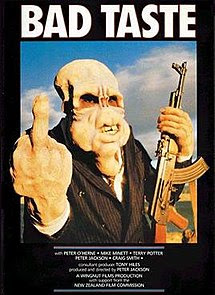 With the release of part one of The Hobbit, I was reminded of how much I really enjoyed Peter Jackson's Lord of the Rings. Those movies are the longest movies that I actually enjoyed being long. Most movies are way too long, The Hobbit included. But I overlooked it for LOTR.

I was a Peter Jackson fan way back when I first saw Bad Taste. Most of you haven't seen it. It's one of the funniest movies I've ever seen. Yeah, it's gross. But it's a very cartoony gross. If you've sat through an episode of The Walking Dead, you can certainly handle Bad Taste.

I enjoyed the first Hobbit movie. I wonder, though, if my enjoyment was of the movie itself or of the sentimental return to Middle Earth. It's too long. Jackson has put absolutely everything possible into this movie, and then added another twenty minutes on top of that. I'll hold off final judgement until I see all three movies - and I will, as Jackson earned that from me with the first three movies. I still can't imagine how this is going to be stretched into three movies.
Created by His Excellency Kaboom32 at 9:28 PM