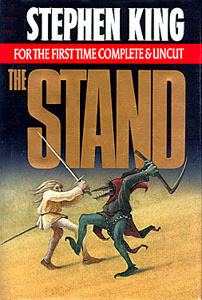 I like Stephen King. He's awesome. There are a bunch of his books that I really love. Pet Semetary was the first one I read back in middle school. It (the book, not the pronoun) is scary with a great story and great characters. The whole idea of The Long Walk has stuck in my head since reading it for the first time, and I recently reread it. Misery was probably the fastest I ever read a book. The whole Dark Tower series is epic and flawfully perfect. The Eyes of the Dragon. The Talisman. Needful Things (which others disliked - I loved the slow build and then all of the shit hitting the fan at once). Duma Key. 11/22/63. And don't forget his novellas which became Stand By Me and The Shawshank Redemption.

My favorite? The Stand. It's the story that really introduces the ideas that are going to go into the Dark Tower series. It takes a lot of great characters and throws them into the worst possible circumstance and watches them become more than they were, for better or worse. It's the next Stephen King book that I'm going to reread.

Yeah, he's also thrown out a few turds. The ending to Under the Dome is first and foremost. I can't make it more than 40 pages into Lisey's Story. The Colorado Kid was ridiculous (Hey! Here's an unexplainable mystery. Let me go ahead and not explain it!). I liked parts of The Cell, but it just didn't add up. And From a Buick 8 had a cool idea that just didn't go anywhere in the end.

I'll probably read just about everything that he continues to write.
Created by His Excellency Kaboom32 at 6:45 PM