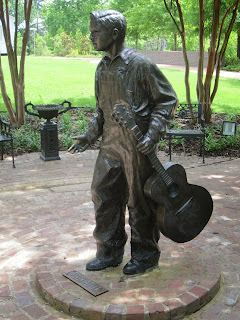 It's not just his music. It's the man, and in all shapes and sizes. He became Rock n Roll. He was the gateway to counter culture. He was bigger than Jesus before the Beatles. He was skinny then he was fat. He died on the toilet. His daughter married Michael Jackson and Nicholas Cage.

My favorite tune is As Long As I Have You. Take a listen. It's short and less than two minutes. But I've never seen Kind Creole, the movie it's from. In fact, I don't know if I've ever seen any of his movies in their entirety (or even more than clips). All I know is that in one movie he wants lemonade, that cool refreshing drink, and in another he has to win this race.

While I lack in the movie watching department, I have paid my respects. In my 1999 road trip, I visited Graceland. And on my 2011 road trip I visited his home in Tupelo. Warning. Visiting his home takes less than an hour and there's nothing else to do in Tupelo.
Created by His Excellency Kaboom32 at 7:22 PM