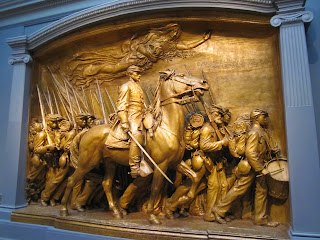 Every year, I show Glory. This was the first year that I haven't shown it. I have a feeling that it will be back next year, as it's not only the best Civil War movie, it's one of my favorite movies.

Some day I want to write something lengthy about Glory, but today is not that day. I want to write about the things I've noticed in the well over 50 times I've shown it and/or watched it in class. For example, and this is an easy one, why does Col. Shaw yell at Major Forbes to train them properly with the rifles? Because of the guy's head blowing up at the beginning of the movie. If that part is cuy out, as it is in the edited version, it makes no sense.

Here's another. In one of the absolute best scenes,  Morgan Freeman yells at Denzel Washington to "You watch who you call a nigger! If there's any niggers around here, it's YOU. Just a smart-mouthed, stupid-ass, swamp-runnin' nigger." After that, the word isn't used by anyone in the movie at all.

And I can't go this far without mentioning the soundtrack. Here's the full soundtrack. Just listen. And if you've seen the movie, try to listen without shedding a tear. It won't work.

Created by His Excellency Kaboom32 at 8:11 PM