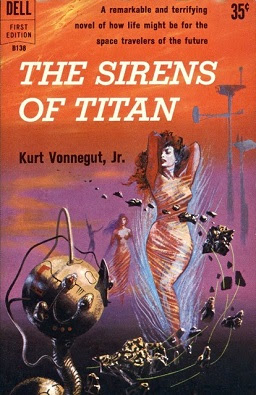 With Kurt Vonnegut, every book you read will be excellent. There was just one that I felt like I had to work my way through, and that was his first, Player Piano. I admit that there are a few I haven't read yet, and I haven't read them because they aren't as highly recommended. But still, even when the plot was tough, his writing style is awesome.

My other favorite is The Sirens of Titan. There are ghosts. There are space explorers. There is time travel. There were points in which I wasn't sure what was going on at all. But in the end, it didn't really matter. Here's why.

Every time I sit down to write, I want to have as unique of a voice as Vonnegut's. And perhaps that's my problem and why I don't get far.
Created by His Excellency Kaboom32 at 8:13 PM