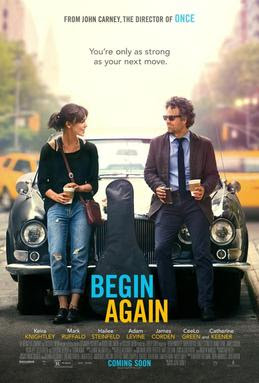 I'm forced to compare this movie in every way to Once.

If you've seen Once, you've seen this movie. Actually, you've seen a slightly better version of Begin Again. This time, the struggling musician trying to create her first album is, as the word her implied, a woman played by Kiera Knightley. And as the gender roles are reversed, she is aided by Mark Ruffalo, in this case a record label exec.

The characters aren't quite as charming. The music isn't quite as fresh. The relationship between the leads isn't quite as dynamic. Though the writer and director, John Carney, is the same for both movies, he doesn't hit the same grand slam that he hit with Once.

But it doesn't have to be. I still like the characters. I really love the way the opening scene is shown from both points of view. It's a fresh take on an introduction. And the music, even though a lot of it has a bit of a generic pop feel to it, starts to grow on you.

I've listened to the soundtrack several times since seeing this back in July. I must compare it with Once once again, as that soundtrack is a permanent part of any playlist I make. But still, a few of the songs have really grown on me. The main song, Lost Stars, I really like. I prefer the Kiera Knightley version to the Adam Levine version, but I like them both. Tell Me If You Wanna Go Home is a bit poppy, but it really worked in the context of the movie.

Yeah, it isn't Once. It isn't a grand slam. But it's a solid standup triple with the bases loaded. I liked it quite a bit.  You can listen to the soundtrack on the youtube clip below.

Created by His Excellency Kaboom32 at 9:56 PM