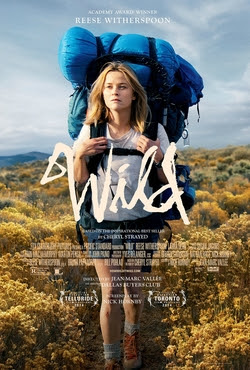 I might be have Wild as high as it is due to low expectations. The trailer and name gave me the idea that this was the female version of Into the Wild. In addition, Reese Witherspoon has never been impressive as an actor. She was good in Walk the Line, but that's still a relatively light role. I was wrong on both accounts.

The similarities between Wild and Into the Wild end at the basic idea of leaving civilization. A big part of this movie is exploring Cheryl Strayed's reason for walking the trail. She comes to the trail from a really dark place, and Witherspoon is really great in showing that side. This is absolutely her best work.

A danger in a movie like this is that there will be too many big nature shots or shots of Witherspoon just walking. I remember when the Lord of the Rings movies were announced and in finding out that they were three hours long. I pictured two and a half hours of just walking. I think the makers of Wild did a nice job of avoiding that in a couple ways. The first is in using the flashbacks to tell her story. Whenever she just walks, we go with her mind to visit her past.

The second is in the use of the soundtrack. Strayed just walked the Pacific Crest Trail without headphones. She didn't have music in her ears. But she was always hearing music. We know this because she hums a few different songs. When the movies starts, the songs are barely recognizable. They start to come together as the movie progresses until you hear the songs played. There was some satisfaction is "guessing" what those tunes were. But their coming into focus goes right along with the clarity in her head.

If you've read A Walk in the Woods, you have a great companion for Wild. And if you haven't read it, check it out. The two walkers go for completely different reasons, walk different trails, have different experiences, and reach different conclusions. But I still flashed back to that book while watching Wild. Both kind of make you want to leave it all behind and just start walking. OK, not enough for me to actually do it...
Created by His Excellency Kaboom32 at 8:57 PM