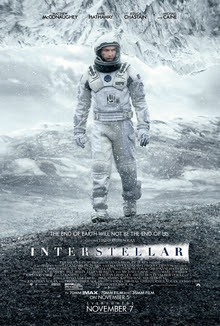 I geeked out at the beginning of Interstellar in a way that most normal people probably wouldn't. It basically starts with these seemingly odd clips of people talking about all the dust and dirt. I immediately recognized the person giving the comment. No, this isn't some famous person that people would recognize walking around the streets. I probably wouldn't, either. But I know those clips and people from The Dust Bowl by Ken Burns really well.

Having just finished another Winter Break, I look back on the past two weeks and think about what I accomplished. Eh, not a whole lot. What could I have done? What could I have created? How could I have helped the world? All right, so maybe I don't feel quite that way, but there's still that idea of lost time.

That's a huge part of Interstellar. One of the scenes involves a huge loss of time. It isn't for the characters themselves. It's even worse. It's the world around them. As they play with time travel, time travels past these characters faster than they experience in. MUCH faster. And that's a weird concept to me that just crushes the inside of my skull when I think about it. I only partially mean wrapping my head around the whole theory of relativity. It's the emotional sweeping away of time that can never be returned.
Created by His Excellency Kaboom32 at 8:36 PM