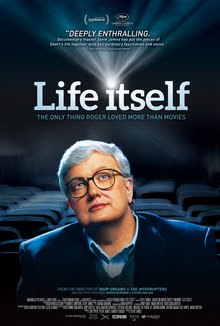 There's something a bit meta about writing about a movie about a guy who wrote about movies. Life Itself received a really high Rotten Tomatoes score. It's sitting at 97%, with 100% of the top critics giving it a fresh rating. I had to wonder before seeing it if the reviews were an homage to the movie or to Roger Ebert himself. It's both.

I learned quite a bit about the life of Roger Evert from Life Itself that I didn't know previously. It does a fine job of laying it all out, the good and the bad, and from an early age, too.

It's the scenes from then end of his life that will fascinate the most, however. Ebert and his wife were extremely open and candid toward the filmmakers as he sat in the hospital with a big part of his face missing, to be blunt. And the movie doesn't hold back from it either. So often we try to hide away the end of people's lives. We want to remember them a certain way, and the time soon before death in a well lived life isn't the image we want to remember. But it's such an important part of him and what we'll take from his life.

Perhaps its because he continued to write up until the end. Even if he didn't look like "The Fat One" from At the Movies anymore, his wit was still there. In many years that I wrote this list, I would read Ebert's reviews before writing about it myself. If I didn't like a movie that he did, I knew I would at least understand it better. I don't get that with any critics today.

And, for those who don't know, he wrote about quite a bit more than movies in his blog. He's the writer, not NdGT or BNtheSG, who gave me a clearer understanding of evolution. I miss his writing quite a bit, and this movie helped me to miss him as well.

As great as the rest of the movie is, the star scenes in this movie have to be the classic Siskel and Ebert clips. Life Itself discusses their love/hate relationship as it shows some of their absolute best, and often cut, clips. Watch this for those alone.
Created by His Excellency Kaboom32 at 10:43 PM