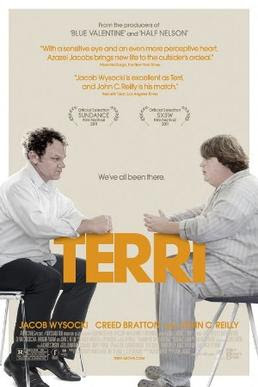 Terri lives with Creed Bratton. If you watch The Office, that's all you really need to know. But Creed has a relatively small role, so there's a lot more to see.

Terri is an oddball kid at school. He's overweight and wears pajamas every day. That should be enough to make him an outcast. This brings him to the attention of the assistant principal, played by John C. Reilly. Reilly plays a slightly more sane Dr. Steve Brule (for your health), and as it turns out, probably the most real school authority figure ever depicted in movies. He wants to do well and has a good heart, but he has no real clue what he's doing. He screws up, Terri calls him on it, and he owns up to it. For me, that's the relationship that works best in this movie.

Terri makes a couple more friends along the way, one a potential odd romance. There's a lot of reality to that as well. Every year, I watch the weird kids find each other. There's one major scene near the end in which the three hang out. It's an uncomfortable scene, and I'm not sure it completely worked, but again, it felt real.

You don't always want a movie to feel real. But being in a school everyday, it's distracting when a movie does something that just doesn't happen in movie. For example, I recently saw something in which a substitute teacher was promoted to full time. Yeah. Not how it works. Or the relationship between kids and teachers or admin just doesn't ring true, I'm pulled out of  it. This movie works, but also you really like the characters.
Created by His Excellency Kaboom32 at 8:35 PM