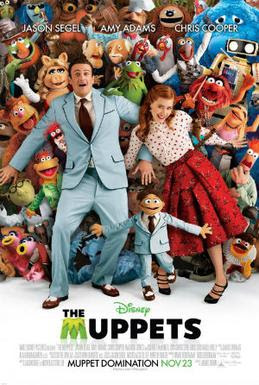 After watching The Muppets, I spent some time during Winter Break watching lots of Muppets clips. There are plenty of fun songs from the TV show and previous movies. Many of the Jim Henson tributes, especially this one, are really emotional. The movie brought back a lot of great memories.

But it's more than just that. This is definitely the most fun movie of the year. Let's start with Jason Segal. He's just right for this. Did you see Bad Teacher? Not a good movie.The one bright spot was Jason Segal. He delivered the only laughs in that movie. How can you not watch the closing of Forgetting Sarah Marshall and not know that he can excel in a Muppet movie?

In the end, the music has to work. Four words. Flight. Of. The. Conchords. They got Bret McKenzie from FotC. Brilliant. A couple songs, "Party of One" and "Man or Muppet," both feel like they could fit in any episode. And then there's the opening song Life's a Happy Song, which is easy to sing along with. Here's a slightly different (and even more fun) version of the song, featuring Bret and Kermit. Life's a filet o' fish!
Created by His Excellency Kaboom32 at 8:48 PM